Another title screen done for Pennywise. This one for Rainbow Silk Road, shown at 200% scale. Original and previous translation's titles are shown below it.
184

« on: November 24, 2014, 09:04:50 am »
Eh, I like some of the enhanced background from Wily Wars, as well as the character portraits for MM1. But, I thought the sound effects were grating, especially the jumping sound effect, and the sprite graphics were muddy and I don't like the lankier sprite proportions. I think it's an interesting novelty at best.

A think a lot of classic arcade game could be adapted and optimized for phones marketed toward casual gamers. Rampart for instance could work well: show your own map during building with the enemy's in a smaller window, and then show your enemy's during attack, with your own in a smaller window.

I think Warlords could work really well on the Wii U (or the wii with DS connectivity. I don't really know how the U works). But having the player's controlling the paddle around their own castle on their touch screen, and having a four castles and the battlefield on the TV would be rad as well.

Which brings me to Pac-Man VS for the Gamecube, probably the best remake of Pac-Man for the added multiplayer.
185

« on: November 23, 2014, 09:11:55 pm »
I like the idea of story being made to justify gameplay and vice versa. In Pyronaut, we have a small line planned to explain items as being strewn about from the ship wreckage (to explain why useful items and first aid kits are found on aliens and deep within a planet after the ship crashed on the surface). It gives some in-game justification and then adds a little character to the aliens. I also made sure to replace things like various sized hearts with various first aid packs.

It's in no way perfect or sensible, but I like power-ups being real items, and for there to be some reason for them to exist.

Then again, I also learned from beat'em ups that if I find a fully roasted turkey from an oil drum in an alley, and take the time out of a fight to eat it, I can heal my wounds.
186

Then, give it a time limit, after sometime you check your inventory and you see something like this:

« on: November 23, 2014, 06:28:33 pm »
It's called The Wily Wars, and unfortunately the grahics and sound are pretty horrible.
November 23, 2014, 08:46:43 pm - (Auto Merged - Double Posts are not allowed before 7 days.)Another game that could use a modern day remake would be Metro-Cross remade for phones in a Temple Run style. It could feature an assortment of Namco characters and level themes.

I would also be satisfied with it being marketed as Pac-Run or something with the Metro-Cross runner as an unlockable character.

Brad Smith's StarTropics Music Fix is without a doubt under that category. RHDN link.

Also, I was admittedly doubtful of DragonDePalatino's Mother 25th Aniversary edition, but it seems to have come out with a surprisingly high quality. Satoshi Matrix left a very positive review for it as well.

Finally, I'd like to call some attention to Arne's Super Mario Land graphics hacks (thee versions in one download), the default of which will always replace the original in my game library. His handling of the tiny sprites is superb.

On a side note, Arne's assorted write-ups  for pitches of how to update old games are all extremely detailed and interesting to read with gorgeous art.
191

On the other hand, they can be really radly done.

Ducktales Remasterd, Bionic Commando Rearmed, and Megaman Powered Up all got it very right.

All three of these, I prefer to the originals.

« on: November 19, 2014, 10:42:57 am »
An interesting idea, Digit. It makes me think of Morrowind in a way, although I think the player's actual learning curve as new items are made available usually represents it well enough. But in a stat-heavier or adventure game, I think the mechanic could be put to good use.

@Grimlock again:
Regarding the player speed, it does upgrade in the game, but I don't think it ever gets to the action pace of a game like Metroid (although I have only tested the game to maybe 40% through, if that.)

When Optomon had told me that the jet pack wouldn't be limited by fuel, I initially had my doubts. But after playing through the first half of the game, I realized that it's handled really well. The player's height is always limited by his jump, but at any point in time while in the air, you can press A to toggle the jets on or off. While on, the player does not lose altitude, and may move left or right. The level design after acquiring it is built with that in mind, and the game takes on a bit of an Air Fortress feel because of it.
193

I agree about the title screen animations. Optomon added the palette cycling after I gave him the title graphics. I was very pleasantly surprised when I saw it.

Yeah, I agree that it's really blocky. It's not quite as obvious in some of the later levels, but it's never organic looking. Rogue Dawn's probably the most organic looking NES title I've seen. Props on that.

As for the liberal arts deal, it's definitely not there for a personal reason. But Optomon has been passionate about the player being a regular joe, and definitely neither a hero nor destined to be. At one point in time, the character was faceless, and a silent protagonist. But as I put together the portraits for the personnel screen, I started rounding out character traits for everyone.

It was then that I made the decision to specify his background (altough liberal arts is still wide: it could be literature, music, visual art, philosophy, history, etc.) I just wanted something that reinforced the fact that not only is he out of water in combat, he's also out of water even doing the labor job that he's doing. The only time it's mentioned is on the personnel screen, which only comes up if you don't press any buttons at the title screen, just a little touch of backstory to round it out.

After that, I thought about giving the player an Archie-esque naivety to his voice, which luckily Optomon enjoyed.

I'm designing later level enemies now. I'll keep your advice in mind for them also. I'll probably run some by you to check out before they get put into the game. It's no secret that my designs are ... cuter... than the game was originally intended to have, but I'm hoping they're not as cute as, say, Megaman.
194

After a long and thoughtful process, with dozens of titles considered, we've decided to change the name of the game to Pyronaut, as that's what Pyron had always been short for. Here is the updated title screen to reflect that change:

Pay no attention to the "Demo" on the screen, as there is no demo floating around. If I understand correctly, it was to be displayed at this year's Portland Retro Gaming Convention, but those plans fell through for some reason or another.

For those new to the thread or previously unfamiliar with the project:

Pyronaut is an elaborate ROM hack of Simon's Quest, featuring an entirely original intellectual property, gameplay, music, graphics, story, etc. For all intents and purposes, it is a completely new NES title that just happens to have built upon the barest of bones from the CV2 engine.

From my understanding, Optomon began work on it sometime in 2011, and I joined the project at the beginning of 2013. Initially, just for graphics, but since then, we've been working together to really flesh out the story, atmosphere, and gameplay, with the hopes of the final project being on par with a high-quality 3rd party titled released late in the NES's lifespan. 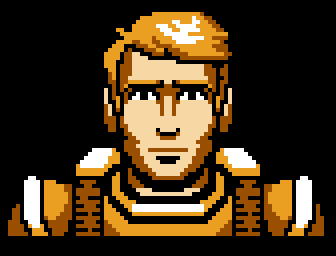 In the game, you play as Romeo Ratuno, a recent liberal arts graduate who has taken a job on a ship of pyronauts, a type of intergalactic construction crew, in an attempt to pay off his student loans. During a routine job on a small asteroid, your crew receives and responds to a distress signal from a nearby planet.

The following video shows off the demo screens and introduction, which explains this and more: 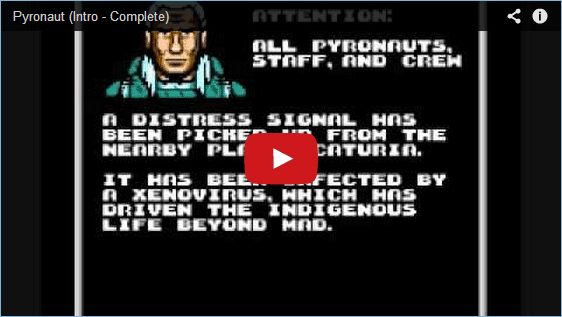 The resulting gameplay is an open-world action platformer full of solitude, incineration, and despair. Burning your way through six unique biomes and countless alien life forms, you must travel deep into the planet to unravel the mystery behind the transmission. As you do so, you will collect items and equipment to level up five player stats, receive seven types of pyrotechnics, (upgrades to your jetpack and side arm), and defeat at least six guardians, each allowing access deeper into the planet.

Although it has occasionally taken the backburner to some other projects, It's been on full burn lately. To mention a release date now, would be as meaningless as any we've mentioned before, but it is safe to say that the scale of the project has grown, and that we're on track to bringing it to fruition, most probably within 2015.


Also, earlier this year, I redesigned the main player sprite once again. Venturing further from the previous design, I wanted something more specific and memorable than what I had made prior, and quite honestly, through working on this and some other projects, I was getting better at making pixel art.

Below, you'll see the evolution of the main player's sprite:

In terms of graphics, I'm hoping for something very unique and identifiable: more modern than Monster Party, not as cartoon-like as the Nekketsu series, but not as serious as, say, Contra. Optomon's been very welcome and on board with the evolution of the art style, and the state it's currently at. As always, feedback is not only welcome, but encouraged.

Also, as may be mentioned in this thread previously, we decided to make the flames and explosions the stars of the game, and have devoted a very large amount of graphics and sprite data toward them, as there are numerous types of flames, bursts, shots, explosions, sparks, etc.

There's a ton of work in progress I'd love to show, but I think it'd be best to wait and reveal further work in large chunks, as Optomon's been doing through his Youtube channel.

In the meantime, below is a look at the new player sprite, with jet pack enabled, utilizing the flame thrower upgrade: 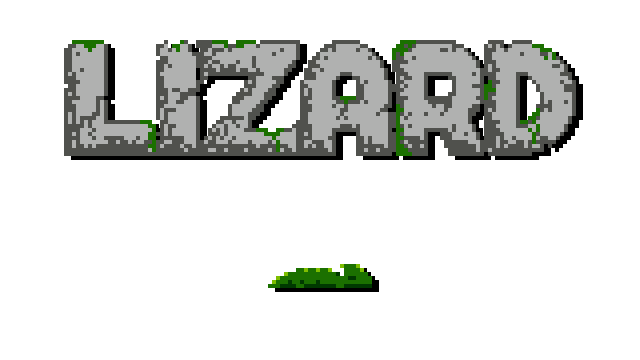 I tried the eyes in various layouts.

I quite like the double googly eyes and their location relative to text in the prototype; imitating it is a pretty high priority for me.

I actually had intended on imitating the typeface from it as well, until I realized that the only difference between it, stylistically, and the US one was being squared instead of rounded.
200

« on: October 20, 2014, 08:45:51 pm »
Agreed. It hadn't crossed my mind that the US one shares its background color with the lower half of the letters instead, affecting its readability when moved onto a different background. I worked in some of the additional eyes from the Japanese version as well. 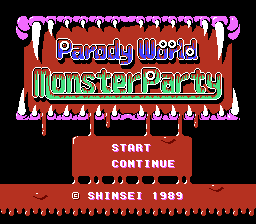