When I patch it, the game freezes after pressing start. IIRC, the original rom it was made from was a version of smb1 that had no title at the topic. But I might be mistaken.

Anyone had better luck with it?
2

Does anyone know of an NES game that loads nearly a whole nametable and attribute table, completely uncompressed, as its title screen?

I'm looking to test some NES screens, and I'd like to have a ROM that I can quickly paste a name table and attribute table into and change the palette easily for testing.
3

Both Survival Kids have been hits, but Zelda had "too much combat." Also finds JRPG-style menu-based combat unappealing (as Earthbound was amiss as well)

« on: March 17, 2015, 10:53:06 pm »
I'm working on a project and I'm needing to alter my nametables to use a different portion of my pattern tables. So, for each name table that I generate, I need to increase each hex value of the table by a specific amount. What is the best way to automate this? Is there an editor that supports this feature?

Also, I want to toggle palette emphasis real-time in FCEUX to preview each emphasis

I found this on the NESdev wiki.

If you could only play one version of this game, this is the one you'd choose.

In terms of this, I'm not looking for things that are completely different games like Mario Adventure, etc. Just improvements to the already existing games.

I'm interested in NES mainly because I'm finally giving in and ordering a flashcart, and am making a ROM list for it.

But for sake of discussion, feel free to make suggestions for any system.
6

For example, say I have an il tile. It would display il in the text side of the viewer.
7

So what I want to do is have the player be able to toggle between the CHR banks while playing. The original game is Mapper 0.

So my attempts so far have been to:

Check out the docs NES Rom Expansion 101 and 102 by TFG, along with King Mike's also.

Then, from the Nerdy Nights tutorials, there is an example in the tutorial that uses Start and Select to swap CHR banks back and forth.

I figured this control scheme would work well because the Shogi game uses neither start nor select during gameplay, and if the CHR bank were to also be swapped during the title screen, the only time start or select are used, it wouldn't make a difference.

So, like a monkey with a screwdriver, I crudely try to identify the relevant code, remove the segments between asterisks below...

ReadSelectDone:   ; handling this button is done

ReadStartDone:   ; handling this button is done

This is my first time attempting something like this, so I'm pretty sure I'm going about it wrong.

However, I find myself in the need to create a small utility capable of

I'm very much a visual person, so I'm wanting to make this through something GUI-based, similar to the experience I recall with visual basic. And I'm wanting to be able to distribute it in a fashion that does not require the downloading of anything additional for users.

Although not romhacking related, due to the members' experience making editors, etc. I thought it'd be wise to inquire here.
9

« on: January 04, 2014, 02:04:43 pm »
Introduction
This post begins a low-learning curve workshop in which I will walk through the steps of creating fairly extensive graphical modifications of an NES game, from setting up a workspace through publishing your completed work through RHDN. Aside from beginners, this should reveal some tips & tricks for more experienced folk, as well as provide a solid foundation for those interested in producing NES-era graphics for other purposes such as indie game design or animation.
This workshop will reflect my process, which has modified over time through trial and error. It is not how everyone works; therefore, I fully encourage feedback on the effectiveness of my process and explanations.
Also, keep this thread in mind anytime someone comes around asking those über-newb questions or obviously trying to bite off more than they can chew for their first project. (I certainly would have benefited from the same advice when I first came around.)

Table of Contents
(will be updated with each new addition)
Getting Started
Setting Up Your Software
Customizing Your Photoshop Workspace
Getting Started
To begin with, you will need to acquire the programs and files with which we will work. Download and install the following files, and organize them into an easily accessible directory. (Unfortunately, most of the tools of the trade are Windows-only, so we will be working in a Windows environment. For others, I apologize. )
Next, if you don't have access to web hosting, I suggest signing up for an account through TinyPic to be able to upload and post your screenshots of work-in-progress.

Selecting a Game
The purpose of this workshop is to modify a game. Therefore, you need to select one and come up with an idea for your hack. I'm sure you've already got some totally awesome hack in mind. Now is not the time for it. Now is the time to choose a simple game so that we may produce a thorough and complete hack in a reasonable amount of time. The confidence and experience you will gain by doing so will enable you to handle larger projects better.

Therefore, browse this list of mapperless NES titles (they are the smallest and best-suited for instruction). Youtube the titles to watch gameplay and brainstorm some ideas for hacks. Keep in mind the scope of the changes you will be making will be complete graphics and text. (This workshop will not cover music and programming behaviors, primarily because they are skills not in my repertoire.)  Once selected, use your own ingenuity and the worldwide web to acquire the rom.

Next Up: Setting Up Your Software
10

« on: December 28, 2013, 09:39:48 pm »
So I've mulled around the idea of putting together some beginner's-oriented tutorials covering graphics, text, palette, etc. that are focused on workflow. This would be a slow-building back-burner project, and in the meantime, I would like people's input as to how other people work.

So I guess this would be a pretty open-ended,"how do you do what you do efficiently?" thread.

« on: April 10, 2013, 12:52:57 pm »
I'm currently working on a romhack of a Shogi title. There's very little in terms of text in this game, and context makes most of them clear, but some leave me stumped and the others, I'd like to get some clarification if possible. 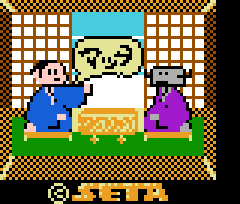 This word balloon pops up if you press the B button repeatedly. If you make it come up a half dozen times or so, the opponent will retract one move.

I suspect that these are Easy/Hard levels for the A.I, as you cycle through the two prior to selecting a match.  They are shown before the selection for the CPU to go first or second. If I'm wrong, please correct. If right, I don't know which is which.
12

In terms of romhacking, I'm primarily interested in it from an art-and-design aspect. As I begin each hack, I set a work brief as if I were a period-era employee of the game's publisher. My primary goal is always to produce entirely or near-entirely new graphics from scratch while maintaining a cohesive aesthetic and hopefully achieving commercial-level results.

The brief for my most recently completed project, Box-Art Bomberman, was as follows: I'd been given a copy of the NES Bomberman prior to its US release and a copy of the American box art and have been told to produce new graphics, manual, and storyline for the game to match the feel given by the box art. 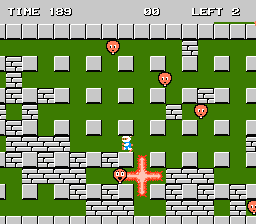 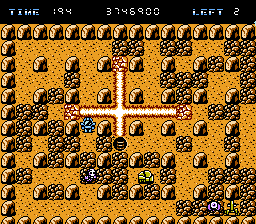 ...and a spread from the manual:

My next project is of the Japanese-only game, Ikki. It uses a lot of simple x-flipping animations, and like Bomberman, has very little in terms of graphics. 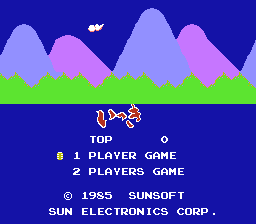 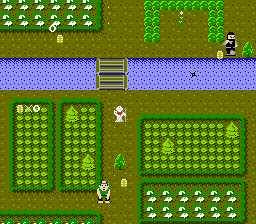 The pitch is to produce a complete Western-themed localization of the game, and should eventually include manual, cart, and box-art. I'm calling it "Ruckus" as the original title apparently translates into something like "riot" or "revolt." In it, (as best I can tell from the google translate of the official manual) you play as a farmer throwing sickles as you revolt against an oppressive magistrate and his waves of ninjas.

In my version, you'll be playing as a ranch-hand  throwing horseshoes and resisting waves of bandits.

So far, I've made the following Western-themed font for it: 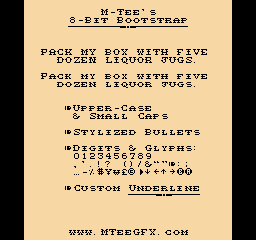 ...the logo for the title screen (My earlier attempts were in the same style as the font shown above, but I finally decided on the following inspired by the text on Sergio Leone movie posters):

I'm currently not quite satisfied with the mayor sprite. As always, feedback welcome on all.
13

Now, for the first question:

I've been working on a couple of 8x8 fonts lately with an attempt to bulk up some of the RHDN resources. I'd like to know what characters aside from the 26 capital and lowercase letters, 10 numerical digits, and basic punctuation (, ' open and closed quotations ? / - ! &) do you find most helpful in a font? I was thinking some double letter tiles for narrow lowercase letters such as ll, il, and li, maybe...

Previously solved issue:
Spoiler:
Working on an NES hack, and I'm sure this won't be the first time I'll need help. So, I'll keep this thread going for my questions. Correct me if I'm posting in the wrong place.

So this is the screen I want to change. I've imported a HEX table graphic I made so I can see the order of the tiles and what palettes are used for each 4-tile group. (micro?) And I'm having a difficult time finding the data I need to change. The background tile layout for this screen is stored in the format as follows:

The problem is that if a micro is used more than once such as:
The data is only defined once, but is then repeated in multiple locations.

How do I find the data that determines the placement of these micros?

If it helps any, I'm using FCEUX and occasionally a separate Hex editor.
15

In particular, I'm interested in NES graphics hacks. Other things such as level editing and what-not don't interest me, but if a game includes some solid new sprites and backgrounds, I'd like to know.

So, what are the best-looking NES hacks around?
Pages: [1]