« on: October 29, 2018, 12:35:15 am »
Yeah that was weird in that translation. I didn't actually try the game (i just downloaded it for RA dat PRs) but i decided to just ignore it. If it was something which the game was supposed to modify on the emulator provided flash memory and didn't even try and decided to cheat, the translation is simply incomplete imo.


As far as i know, maybe that system (SNK color right?) had a habit of giving out flash memory cards along with the games, or it was supposed to be on the cartridge itself but the emulators prefer to divide the rom into 'writable' and 'not writable' part instead of being sane and doing a copy on write.

Could also simply be a savegame, several translations sometimes give them for convenience or because of bugs on the translation (for instance, the english glyphs for names not working correctly with the charset that the game insists on using for the character generation - more than one translation has a 'oh btw use this tool to modify your save files to get the right name ahaha' admissions of failure).
22

I prefer the ps1 one myself, which is why the whole deal of implementing it to the psp version to begin with.
they're both great though, I just have a really soft spot for that ps1 midi goodness <3

Since you're heavily modifying the code anyway, you know what would be godly? Extending the options screen and settings save so it's a runtime switch instead (or as a feature) of a alternative patch.

Probably too much to ask - extending the iso so it can fit two soundtracks and fix their pointers to be runtime switchable instead of just replacing the files can not be trivial - but i'm just throwing the idea out here.
24

I'm kinda surprised no one's gone with the joke and asked about Royal Flan.

That.... would be amazing actually. I'm old enough for that to be funny (Flan is actually really disgusting imo, and i always cursed spain and france for inventing them and America for turning it 'affordable' when i was given one back then - especially the disgusting caramelized sauce varieties).

Horchata on the other hand, it's a tragedy it isn't popular outside of spain and mexico (not surprising considering the nuts cost).
27

Even if you're going the custom patcher route that requires understanding the filesystem, i'd suggest releasing binary xdelta patches for romhacking.net, if they're not too big or if the first requires manual steps (it isn't likely from the size of your download).

I'd love to see more dreamcast translations but i think a process that minimizes the wasted space is necessary, something like the tool that pc-98 translations are using now that understands the filesystem and can create a patched version without manual steps (or very fragile scripts) by extracting the files, patching them and creating a new version of the filesystem that works in place of track3.bin (i think i'm right about this).

Basically it should work on wine, without a interpreter and preferably without path platform problems, so no python or wine anything like that is necessary.

Rust would be a good language because it creates static binaries by default and cargo is easy to use to crossbuild iirc.


That tool, (patchy 98) really revolutionized pc-98 translations and they're much more common now. Maybe ask for help from those guys? (though i suppose the dreamcast sega format is very different from a standard fat16 or whatever pc-98 used). One dream is to one day do a tool like that that works for most console filesystems so patches of 10 mb that turn into 1gb xdelta patches because of changed size of files are a thing of the past. I feel this is a bit unlikely because recent consoles started making their own compressed/encrypted virtual filesystems that have the same problem at a higher onion level, but the quest is noble...
28

But i like Flan-hime because any anime viewer or manga reader eventually learns it through osmosis.
29

« on: October 18, 2018, 06:17:37 pm »
This game is getting a comprehensive hack right now, due to the various efforts from hacks for individual bugs fixes from fans here.

« on: September 23, 2018, 05:07:23 pm »
Well, it not only predicted it would be a 'core part' but it's pretty explicit about 'everyone is connected' and the disintegration of the border between real life and the 'wired' (ie: no one is really anonymous - except Lain at the end when she erases her past and history) - this is a pretty unlikely idea at the time before facebook and the rest of the dataminers.

There is also creepy gender roles pressuring, including sexual, and alienation going on, not to mention the suicides and hikikomori tendencies, different 'roles' for different audiences, etc. Only really needs a #metoo and some fascism and racism there.

It's not really surprising considering the author being a fan of psychological horror. Reality seems to have a darkest timeline bias. Anyway, it's a important cultural artifact.
32

« on: September 23, 2018, 04:34:14 pm »
I mean it has no gameplay (being basically a collection of 'web' pages with occasional videos and multiple endings, but this anime is kind of a big deal if you care about 'intellectual' (cultish) anime and it predicted some bad internet and real life stuff that only entered mainstream cultural relevance now.

There were two projects one that goes to a dead apache page another that never started and a 'pdf' at http://laingame.net/about.html

I think this game might never really be translated because it seems to have many audio files, which are even worse than movies to dub or replace by (good) voice acting on the ps1.
33

« on: September 20, 2018, 06:04:40 pm »
The patch itself still requires a header. It was modified so that the tool that removes header requirements from the patch (not from the rom) works out of the box.

Anyway, i don't begrudge patch authors header requirements, they're often necessary because their IDA projects, notes, faqs about the rom or similar were originally made with the extra 512bytes and correcting offsets is a pain, just that they're easy to remove and consider for new projects not to have them or use bps that doesn't require headers for end users to apply the patch.
34


This is completely impossible to be a false positive - especially because the tool calculates md5, crc32 and sha1 for the dat file and compares it to the Retroarch repository copy i had committed some months before - except if there was a mistake uploading things - either the 'new' patch on rhdnet is still the old patch or i downloaded the previous time i patched (not this last one) when the version number was wrong but 1.01 was already uploaded.

I'm just posting this for the actual hackers to make sure they uploaded the right patch not the old one.

3 months ago, i introduced the game block

edit: this was fixed by a new upload.
35

« on: September 18, 2018, 09:15:30 am »
Well, nsrt does the same for me in command line format with many more uses, i'm fine about that. I think if i had the patience/skill to figure out what the hell went wrong with ipsbehead on 'beheading' this ips i'd try that because that tool has no equivalent to save time on the 'remove header requirements from softpatches' dance (on upgrades too).

The code of ipsbehead is on a single c file so it's rather simple too if some C coder reading this is interested in this task. The repo has been inactive for nearly 4 years, so it's probably 'forgotten if not dead' to the original author.


Another alternative to this particular patch might be distributing it as a bps - the format doesn't care about the size of the roms, it just recognizes a snes header and skips ahead.
36

« on: September 18, 2018, 01:23:02 am »
Yeah, i'm on linux and prefer to use native tools when possible. GUIs are mostly unnecessary too. Tush works for removing the header requirement of the patch then (not the rom)? The page pretty much says 'rom'. The additional steps are annoying because I always softpatch (my filesystem has deduplication of identical read only files).
38

No snes patch actually requires a header and no-intro standardizes on no headers so i really couldn't understand the reason why people still upload patches with header requirements, so i proceeded with my default strategy of applying 'ipsbehead' to the ips file.

This didn't work for some reason even if the utility is as simple as it gets in code.

I opened this bug: https://github.com/heuripedes/ipsbehead/issues/1

tl;dr: it's possible to make this turn into a softpatch to the no-intro rom but you have to do it 'the long way around' because of a bug on ipsbehead (apparently).

put a header in the nointro rom with nsrt, apply the patch, remove the header, create a new ips from the 'original' to the 'patched' rom.
39

Newcomer's Board / Re: Do these two ff3 hacks work together?

« on: September 17, 2018, 08:47:17 am »
I'm not a fan of when a hack puts in 3 different patches to be applied conditionally, especially when this is already meant to be combined with multiple translations (chaos rush is already doing the same with a optional bug fix and a thin font). Gets confusing quick when upgrading if you want to softpatch.

Oh well, i shouldn't complain otherwise it probably wouldn't support multiple translations. But from a 'tabula rasa' approach i much prefer that multiple conditional patches don't exist, and if some combination is supposed to work with only another patch they're marked as addendums on their own pages.

I'm trying to use this with Chaos Rush translation ofc, so the idea in 2.1 is to

edit: in the same line.

edit: IMO it would also be good if a more complete patch for this got rid of dialogs mentioning 'CP', of which there is one right at the start from a elder though i suppose that would run into the 'even more patches' problem quick for the various translations.
40 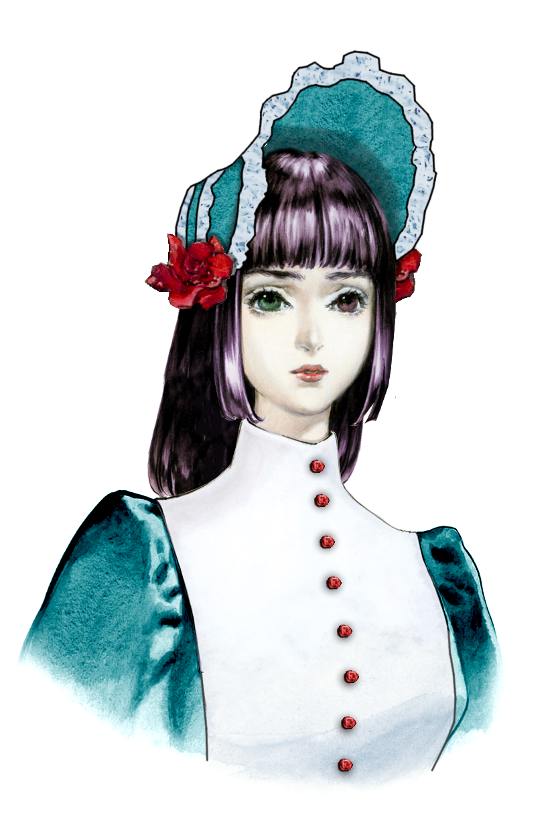 The head gear seems to be at a more oblique perspective than the head itself so it looks like it's 'painted on' because of the conflicting perspectives.

The 'shadow' on the underside of the headgear clashes quite a bit with the shine of the top hair too. Since he light focus seems to be frontal on the original, the shadow probably needs to be severely minimized until it's a slightly darker shade of hair on the very top of the head OR the shine at the top of the head removed. Another alternative is to make the whole underside darker and remove the 'shine' of all the hair.

I understand the shadow was probably to distract from the 'paint on' look, but you probably need a better solution i'm not painter enough to notice, even if it's hard with such a rigid surface. The fabric on the sleeves has a much more natural organic shadow look... this is mostly due to the shadow play and organic creases changing the colors and grain. Consider making a slight 'shadow' on the visible part of the back of the hat in addition to the suggestions on the previous paragraph. The underside of the hat color looks fine for a 'frontal light' thing but it also makes the decorative fringe look artificial because of lack of relief. Dunno how to make it better cause not a painter.

All this criticism might be pointless when the images are downsampled to the NDS resolution ofc. No one might notice.
Pages: 1 [2] 3 4 5 6 7