Got my computer and controller set up in my room and am looking forward to trying this out!

Been wanting to for a while but have sadly been playing a bunch of WoW Classic since its launch.

Erm, anyway. This will be a fun change of pace and with an even newer patch just released? That’s epic!

Cheers everyone and thanks for the adventure!!

I'll have to check this out some time.. thanks again!!

haha I just realized that mistake!

But It was Gannon in one game though, and only in the intro. One single game & pretty sure it was a typo... 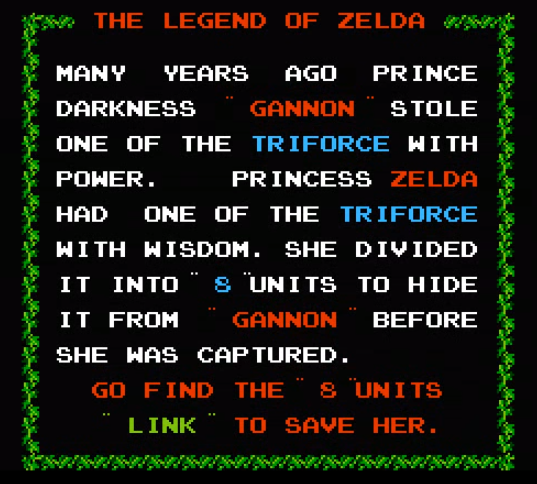 Anyway, cool beans. Will have to try your hack out sometime!

But.. Gannon is supposed to be spelled Ganon.. lol.

One of my fav NES games of all-time.

Gaming Discussion / Re: Your #1 RPG you ever played?

There are many others, but these are the main ones I loved. Also, I'm still trying to finish my two perfect sorceresses in Diablo 2, my d2jsp ID is Drag0nwind if anyone else uses that website!

I'm excited to say that I have now fully completed the_icepenguin's Zelda II: Part 2 (Hard Patch) without save state and uploaded the final piece of the puzzle to my YouTube channel! The above link is the Great Palace and the fruits of my labour.

I left some comments on the video itself, so I won't get into how difficult it was here. I will leave a few notes though:


I'm really glad to be finished the last video, it was truly an excellent palace and the icing on the cake for my channel. It's a little bit longer than my Part 3 video, but if you're a fan of Zelda II and want to see the Great Palace completed the way icepenguin intended, get yourself comfortable and enjoy the video!

Thanks for watching everyone and thank you once again to the_icepenguin for the awesome adventures!!

Gaming Discussion / Re: What kind of turn based rpg challenges do you like?

« on: April 21, 2013, 07:12:13 pm »
I guess it wouldn't really be turn based, but I really like when there's an 'Active' option in RPGs for battles. It's so cheap when you can take as long as you want to select your next move.. the enemy should be allowed to pound you down while you are deciding. Although, I really liked the turn based battles of Dragon Warrior.

I think I remember that boss in Tactics. I had a single legit playthrough and it was pretty fun. I remember getting stuck on that boss for a quite a while, since he uses clops right off the bat. Learned later on that you can buff up ramza in the preceeding  solo fight and those buffs carry over to that next battle, which makes it pretty easy.. haha.

Gaming Discussion / Re: The 8 bit through 16 bit era

My staples probably would be:

Final Fantasy IV, VI, Mystic Quest, Gradius III, Link to the Past, Secret of Mana, Mario Kart, Mario World and many others.

I sort of moved to computers after the N64 and Playstation though and stopped playing console games completely. My computer brings me more entertainment than any console could, lol.

Not sure if it's because I'm growing up, but, I haven't really been interested in playing games as much anymore. Love seeing new hacks come out on RHDN, but other than that, I guess I'm biased. Those original games gave me the best memories, hehe.

I'd like to know which tools these people are using to edit entire levels. The only one I could find has a god awful DOS interface and is completely unwieldy. (or I'm just really impatient) I remember the editor requiring the user to guess the location of any individual room, without having access to any sort of reference map. When you opened a room, there wasn't any way of knowing which area it belonged to.

I don't know too much about the tools, but I think that the_icepenguin credits dwedit for his hacks, if that means anything.. hehe.

Completed the_icepenguin's Part 3 (Hard Patch), without Save State and wanted to post the Great Palace video if anyone was bored and wanted to check it out. Was a really great hack by icepenguin, had a lot of fun.

The trip to the Thunderbird wasn't very good, haha. Failed many times, didn't think I'd actually take him down when I did. Let me know what you think.

« on: February 21, 2013, 04:17:27 pm »
I think the cooler news is that Blizzard has announced a new partnership with Sony to start releasing their games on PS3 and PS4. First game to be released is Diablo III. Boo yeah!!

Not really into consoles, but, whenever my brother comes home on leave, we have trouble finding a decent co-op game to play, especially dungeon hunter types. This will make a welcome addition!!