I think your new gfx look great. That's partly because I'm highly receptive to anything that looks different in a game I've played to death. But even trying to account for that I think you did a good job. The only thing I'm not 100% sold on is the carpets. Maybe the dithering looks better when the image isn't blown up like that.
2

Programming / Re: Where did you learn assembly from?

...In retrospect, not the best introduction, but it sure was comprehensive.
3

For this project, I had two git repositories: one for the rom, and one for the assembly patches. I know, that using git on roms isn't ideal - I was concerned about the size ballooning, and merging just doesn't work - but it was still better than doing manual backups, imo.

It worked well for the asm patches, though. The workflow was like this: I edit the ROM with the level editor. My makefile creates an untracked copy of that ROM, and applies the assembly patches on top of that copy.

I just don't feel comfortable working without some kind of backup system, and git is the natural choice for me. Though, this only makes sense if you already use assemblers with romhacking (I find them to be indispensible tools).

(After this I started disassembling Oracle of Ages, which heavily involves git and will facilitate collaboration when complete, but that's another story.)


There are other options for collaboration, though. For my Wario Land 3 editor, I made a feature to import and export levels into files independant from the rom. In theory this would allow people to collaborate more easily, though they would need to keep track of which level uses which resources, to avoid situations like multiple people editing the same tileset.
4

The tenacity of Pokemon and Mario hackers amazes me.

If only a tiny bit of that tenacity would also apply to the Zelda scene...

Why no love fo Yellow?

I toyed with the idea, but I wasn't in the mood after sacrificing the last 2 weeks of my life on this. Perhaps some other time. =P

Though, Yellow does have a "gen 2 graphics" hack, which I don't believe has been uploaded here. Not as good as full color, but still an improvement.
6

I recall the section.
http://problemkaputt.de/pandocs.htm#lcdcolorpalettescgbonly has it towards the end of that.

Do the oracles games have colour adjustments then? I did a token search before I posted that but saw no mention of a brightness tweak for them.

They do indeed have colour adjustments. The post you linked earlier has a code to disable it.
7

I've updated my link, at least until the next time Dropbox deprecates its URLs.
8

ROM Hacking Discussion / Re: How does Link's hitbox work in LADX with tiles?

I'll just write out my theory below. Although I've disassembled a lot in the oracle games, I haven't examined this mechanic in detail, so this is just based on my observation.

In the oracles, Link can "edge clip" 1 pixel left, down, or right, and 2 pixels up. That is, he can get 2 pixels closer to a wall above him if he walks into it from the side, than if he walks into it directly. I don't know about LADX, but it clearly has larger margins.

This is just for walls. NPCs and enemies have different collision behaviour entirely.
9

There isn't THAT much useful information yet. However, in the "Common hacking questions" section, you'll find an invite link to a Discord server where I hang out most of the time. You can find the other Oracle of Ages hackers there. (There aren't many)

I'm basically looking for any opportunity to spill out my knowledge of this game, so uh, let me know if you have any questions. =P
10

You guys could probably put this sort of stuff on zeldix.net. It has almost nothing but A Link to the Past stuff but that's not a rule. There aren't a lot of people who work on Zelda III so it's not like any other Zelda hacking would be in the way there.

I've checked that place out before, but all of its rom-hacking related sections are phrased in such a way that they assume you'll be talking about Zelda 3. Unless they're intentionally limiting their scope, they could use a "miscellaneous hacking" section.
11

We still have an archive of the site, perhaps it has some useful information on link's awakening: https://drive.google.com/file/d/0B3WMeBDDuDleaDB5U0g2S0x6Sk0/view?usp=sharing

Personally I'm not as much into LADX as the oracles, but I'm always glad to see people hacking it as well. It's almost as good as the oracles.

Looks a lot better. I'm surprised they let you use those screenshots though.

All screenshots used in submissions must be “clean.” Clean means they are at the console’s actual resolution

Oops. Guess I should've known RHDN would do the upscaling itself. I'd submit an edit, but then the staff would have to review it again. =/
14

« on: July 13, 2016, 08:21:38 pm »
Alright, it took me long enough to get around to testing this. Turns out speedrunning games makes them incredibly boring to play casually. Anyway, I've played through the standard game and fixed all the kinks I could find. Aside from tweaking the formatting of newlines and stuff, the only major issues encountered were breakage of sound effects, and corruption with patch's text (due to "tuni nut" and "broken sword" being substituted into his text, my text parser couldn't know where to put the newlines). Both of those are of course fixed.

I also made some tweaks to the font. For instance I thought that "u" looked too much like an "a" espacially on small screens. It's mostly the same though.

I'll bet those are really hard to read on a real gbc tho.

I just tried it on my sp, it seems readable enough to me. The original is certainly impossible to NOT be able to read, though, in comparison.

Looks pretty good! Will it work with the european version of the game? I would love to play Ages in spanish with a VWF

This is, unfortunately, based on the US version. In hindsight the european version would've been a better base for the disassembly, as it had 5 languages.

I may be able to support it in the future, but this is the same hand-wavy future as Seasons support. Buuuut it took me something like 3 straight hours to go through the english script and remove the newlines... I don't envy doing that for 4 other languages I don't speak, aside from French. It could perhaps be automated, but it wouldn't turn out as nice.
17

« on: May 13, 2016, 03:55:11 pm »
Obviously inspired by LADX VWF Edition, this hack uses the same font for Oracle of Ages. The font in this game wasn't as terrible as in Link's Awakening, but it still looks a lot nicer and more compact.

Download it at the Project Page, or view the Source Code.

Now I know what you're thinking. "What about Seasons?" Well, this was done using my Oracle of Ages disassembly, for which an equivalent doesn't exist yet for Seasons. In the future I hope to merge a Seasons disassembly into it. For now, though, Seasons will wait. 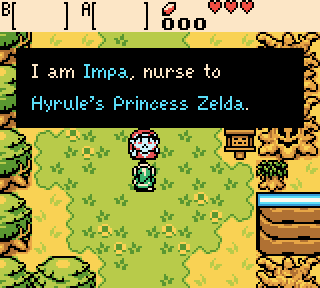 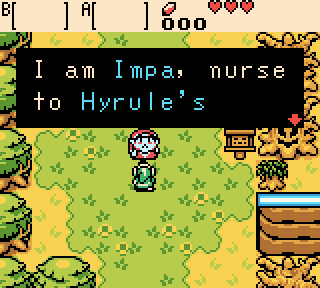 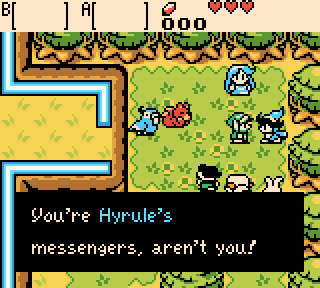 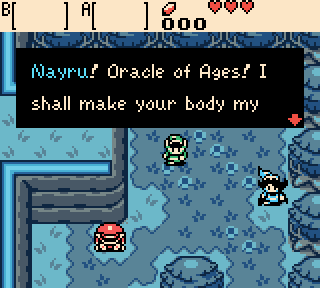 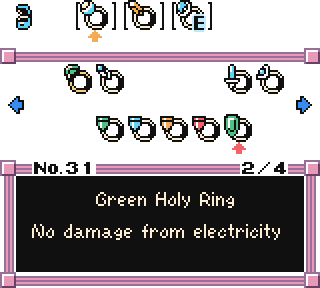 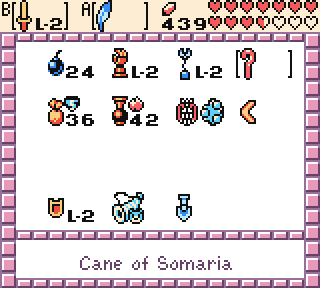 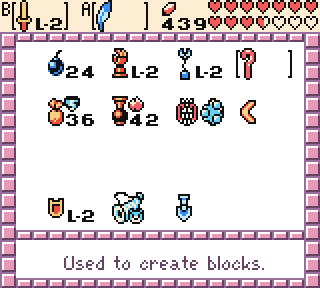 The English translation of Link's Awakening is pretty good, from what I've compared of it to the Japanese version, just a bit censored (no more hippo boobs or topless mermaids). What I'd really like to see from the VWF Oracles thing is a retranslation, because to me those game's English scripts always seemed a bit... Well, not bad, just kinda dry and a bit lacking. You can tell that the lack of VWF did a number on them. The number of straight-up mistranslations is really low, though, which is weird to see from a Capcom game of the time.

That sounds awesome, I don't speak japanese though. Although, when I'm through with this, it should be easy for anyone to make edits to the script. Actually, it's already easy.

So yeah, if you or someone else wanted to make a retranslation, you'd have my full support.
19

A 3 lines hack would be nice to have for the Oracle games.

Hmm. Interesting thought. Sounds almost doable, but I'm not sure I want to go that far. Expanding the size of the textbox would be its own can of worms, given the limited vram. If I gave up on vertical tile alignment, maybe I could squeeze an extra row in there? I'm not sure that would look very nice though.

I should probably make my own thread before this one gets taken over.

For what purpose? I've never really been a fan of the italicized font used in LA, but your new one seems squashed to only use 75% of the text window instead. Are you planning some sort of character portrait to be added to make it similar to say, the GBA Final Fantasy games? if not, then I don't understand what the benefit of blank space in the text windows is.

Take a closer look. He re-jigged the newlines so more text can fit in less space. That example just happens to have a bit of blank space at the end.
Pages: [1] 2 3 4 5