That byte change you mention, do you think it could be easily rectified with the use of a Game Genie/Pro Action Replay code or would it require use of an actual patch?

I rarely make use of GG/PAR codes, so I wouldn't know how to create one for it.

But I have released a patch for the US, EU and JP versions of the game here on RHDN.
2

Thank you for looking into this matter so thoroughly, I honestly didn't imagine it would have caught anyone's interest given the obscurity of the game.

So, from what I understand, the tileset data was there all along (in the Sega CD version) but it was never loaded due to a programming oversight on Core's end?

Yes. I looked at the game's TOC and noticed a disparity between the level data size, and the amount of data it was supposed to read. Just increasing the value of how much it should read fixed it. A single byte change, actually, but one that's been neglected for 28 years. Everything points to it just being an oversight on their part.
3

« on: November 16, 2021, 05:17:42 pm »
I don't usually play SMW hacks, on account of them being nearly always absolutely dreadful. I'm not particularly drawn to your hack's art style, but the simple fact you've made something different and are using completely original graphics (instead of ripping off other games because you despise intellectual property, art, artists, have no integrity and/or swim in a pool of your own self-entitlement), means I'll probably give this a go in the near future. Even if I end up not enjoying it, that alone deserves a playthrough.
4

November 02, 2021, 01:22:03 pm - (Auto Merged - Double Posts are not allowed before 7 days.)
Quote from: LagoLunatic on November 01, 2021, 07:35:21 pm
Actually, I think I have another question, regarding events - can DSVania only operate with the events listed on the Entity creation tab? It lists events from 03 to 1F, although there are dozens more on the Text Editor. All attempts at producing a simple message by using one of the two empty events on the Text Editor, or even reproducing others beyond those on the 03-1F list, haven't really worked out. I understand that modifying anything outside the scope of dialogue in the actual event would require ASM... But, is it impossible to directly address those events declared on the Text Editor? Mina has a series of conditional dialogues that could be repurposed in theory, but seem to be unaddressable regardless of the value in the Entity tab, whereas Julius and Graham encounters can be called anywhere.
5

By the by, two quick questions if I may - does the game use hardcoded values for what constitutes a Chaotic Realm room? As in, would it be possible to place a new room somewhere close to the regular castle's rooms and declare it as part of the Chaotic Realm, inheriting specifics like only showing that room/area in the map (the rest of the castle map is not shown when traveling there)?

Also, is it possible to access and export/import the area names (ie., Study, Arena, etc.)?
6 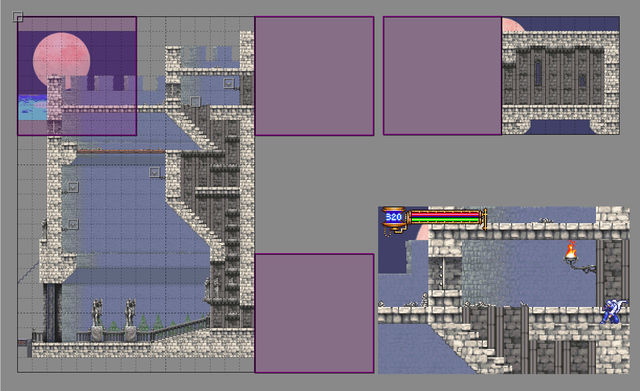 Notice what happens when they're "aligned": Soma is placed below ground level when exiting the new room.

This is what happens when they're "misaligned": 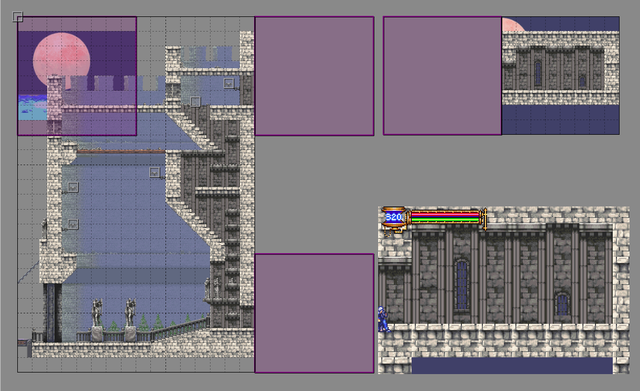 Same error, but only when entering into the new room.
8

« on: November 01, 2021, 03:25:22 pm »
Been tinkering with this for a day or so, mostly to gauge possibilities regarding room editing for AoS with Tiled. However, I've noticed that on occasion, even after successfully creating and linking two rooms together, Soma will be placed below ground level. As a quick test, I edited the top right of the starting area, placing a room next to it, even making sure the ground was at the same level between rooms. Every time I enter the room, this happens: 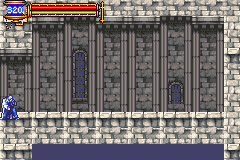 But exiting the room presents no issues. Soma will adjust himself to the height, but still...

Congrats, and thanks to everyone from LIPEMCO! involved in this translation. Hope I can find enough time to play it soon...
10

« on: September 11, 2021, 09:18:05 am »
In European and Brazilian Portuguese, "bastardo" is almost strictly used to describe illegitimate offspring, making that translation come off as painfully literal; whereas, in English, it's also used as an insult towards someone's character, pretty much in line with "scoundrel" or "bandit" (which was clearly what the original localization was going for with "Scum"). "Seu miserável bandido"/"Seu bandido miserável" would be a lot more natural sounding to a Brazilian or Portuguese reader.
11

Over the past week or so, I've been hacking Rabio Lepus Special in an attempt to localize it to English. The PC Engine version doesn't seem to get much love compared to the arcade version, but while I understand why this is the case, it's still a nice cute'em up, so I figure why not. I mean, the only thing stopping me is that I never hacked NEC's platform.

So, what changes have been made so far? For one, I've redrawn the title screen with the localized name of the arcade release in the US:

I've also managed to translate the level intros, and applied a slight shade to make the text more visible. It is white, after all, and smaller than the much larger characters initially used. Ideally, the letters would be outlined but there's not enough room for that due to how I've tried to take full advantage of the allowed 16x16 space.

We now come to the part that is missing:

1) Unfortunately, the text in the level intros is still shown as the original one: one 16x616 block at a time. While I have found the code that dictates when each character appears on screen, I have yet to locate what handles how long it stays there. So, I can make all characters appear simultaneously to counter the lower overall readability, but they still go away too fast - even faster if made to appear simultaneously.

2) The bigger issue, however, is... At the end of Levels 1, 2, and 6, characters will show up and thank Rabio for the rescue (they're the same ones as the arcade version: the Princess' sister, the King, and the Princess, but with much less revealing attire). But maybe I'm feeling a bit burned out as I haven't done much more recently than going back and forth through the ROM, but I still haven't found where nor how I might change the code responsible for printing the dialogue intermissions in the game. The dialogue refers to a set of 37 characters (including one which is printed on top of a letter on occasion) but uses 1 byte for 2 character combos. 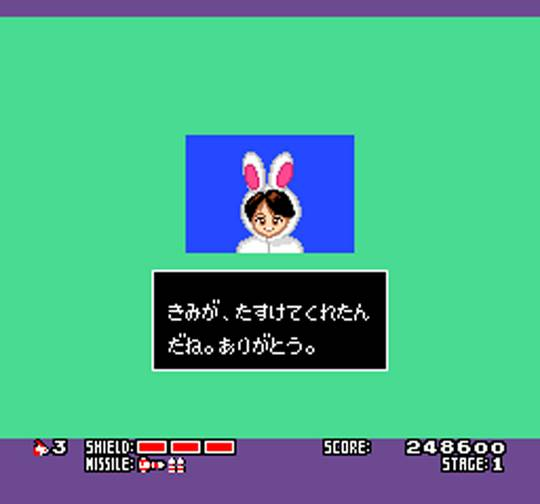 On the other hand, not only do I know exactly where this dialogue is, the ROM makes no effort to conceal it - to the point I found it just by looking at it raw with a hex editor and recognizing the dialogue screen itself. Further, the code in this location is so malleable that one can easily extend the dialogue boxes without much of an issue. So in theory, armed with a way to insert single characters and with the dialogue I've translated, this could probably be done in half an hour's worth of editing and playtesting. I can also whip up a font for an English localization. It's just... I can't seem to locate it.

I don't know if other efforts to localize Rabio Lepus Special have been made, but it would be nice to see this finished. On request, I can provide the script, the codes for the JP dialogue, the dialogue screen offsets, and the timing code I've found.

Edit 2: I may have found the table. Looking into it now.

Edit 3: Table rewiring and script insertion is underway. All that's really missing is the timing code... 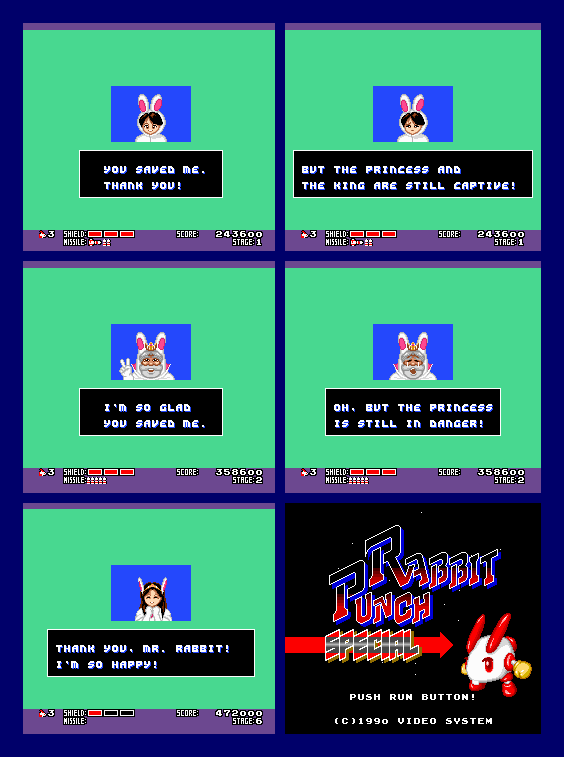 Been working on this on my own for the last couple of days; everything seems ready to go, so I'm marking this as "Solved". Will playtest this as soon as possible, then release a patch.
12

« on: August 26, 2021, 02:41:52 pm »
I always had a feeling PC-Engine games were a bit nightmarish to work with. I usually don't find as much documentation for them, either, and my Japanese is virtually none, so I tend to avoid getting into that. But you pulled through

Don't worry, I've lost count of puns I'd be saving for years until someone beat me to the punch.

By the way, kind of unrelated but aren't you the author of the Taled editor? If so, mind if I shoot you a PM? I promise I'll keep it brief

Will give this a whirl soon enough, looks pretty cool. Nice work

« on: August 16, 2021, 08:28:48 pm »
I know the Amiga version was the original one, but don't know which came first, the Genesis or Sega CD port. Curiously, did anyone back in the day when print was king noticed or mentioned this in reviews? It doesn't seem like any of the so-called "retro lovers" on YouTube noticed or mentioned the difference between the Mega and Sega CD backgrounds, either.

Anyway. Looking at the ISO the missing graphics are actually there, including the Dense Jungle tiles... The issue is they're simply not loaded into the level's memory. Compare the level through a VDP Viewer output:

But even more interesting is that they must have been expected to be, because there are tilemap definitions for the scrolling background: the level will automatically display any graphic referenced in its tilemap, just not the correct one. I assume this must have been some mistake on Core Design's part. 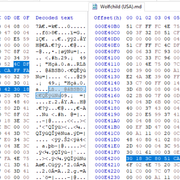 I've tracked down one of the possible strings that affect this by running breakpoints on the Genesis version, then comparing it with the CD version's code. The CD version uses the same code *twice*, presumably because unlike the Genesis version, the Dense Jungle is composed of two levels and not just one. Regardless, the changes I've made definitely require a lot more fiddling. The missing tiles are loaded into memory but they're not quite where they should be and they corrupt other stuff. Not sure how to go about this one for now.

I'm just playtesting it now to check if there are any side effects (doubt it), and then I'll have to scour the nets for releases and make IPS patches.

I'll update the post with more info on the issue that was present in the game as soon as possible.
17

This is going to drive me insane.

The only thing that comes to mind in a 2D, flash-based, overgrown kind of aesthetic would be the Samorost series by Amanita Design but that Reddit post mentions it being black and white, which wasn't really the case (though some screens certainly had subdued colors).
19

Nice. You did the right thing