I have been unable, so far, to find the sprite placement data in the ROM. I searched for specific tiles and their palettes and did not find anything obvious in the hex. (Admittedly, the code is hard to read by sight.)

Mesen's Sprite/OAM RAM (in Memory Tools) is outputting valid metasprite data but I haven't yet spotted anything similar in the ROM.

I would be using Shiru's NES Screen Tool to rework the metasprite construction.

It's possible that there's some compression going on or an unusual format, or that the PPU is assembling bits and pieces of the CHR sprite sheets together, in a way that's different than expected, so the rows it's calling are different. It does that for the title screen, which I've already reworked. The emulators Mesen and FCEUX do not account for this, so I can't really be sure.

Maybe the game skips the palette byte, since every character in the game uses a single palette?

There is a strange version of Minnie in gold on this sprite sheet, with reversed colors. I'm not sure if this actually appears in the game.

The game has a level select cheat, but it seems to mean that you don't get to see the Alice ending. I'm wondering if there's a way to skip to the ending for playtesting purposes.

Also if anyone has experience with ASM 6502 NES coding, I have some additional questions to ask you privately.
2

This is based off of the Dr. Mario DX Game Boy hack by marc_max and Da_GPer, seen here:

This hack added color to Dr. Mario (making it a Game Boy Color game) and also created more NES-like graphics for the viruses.


I've worked on a few NES hacks and gotten familiar with that format. This is my first time attempting Game Boy and Game Boy Color.

I'm using Visual Boy Advance for an emulator, which can look at and export palettes. Not as good as Mesen for NES, but all right.

I don't know much about Game Boy Color palettes, how to generate them, and how to change them. Google searching hasn't been helpful on this topic.

The Dr. Mario DX game cycles through a few different palettes on the title screen and during gameplay. Some work better than others. I need a palette that's basically one color to work with my greyscale title graphics (or I'll have to simplify them).

Since I haven't changed Mario/Garfield's palette, he's a bit pink right now instead of orange.

There is a Mario happy "winning" sprite, I'm not sure where that shows up in gameplay.

I also don't know how to access 2 player mode for testing.

On an unrelated NES note, I am trying to learn how to enable custom music and custom backgrounds in Mesen HDPacks. There's a lot of discussion about this but not much good info, probably because it differs for each game and isn't done automatically by Mesen or related tools.
3

There's lots of empty space in it, which may make hacking easier.

The video here is a "best case scenario," as it shows functionality which is not present in the ROMhack currently. I'd like to get it closer than I have.

Added in the video (but not in the ROM) are a four-frame running Odie sprite, loss animations for Odie and Garfield, and a win animation for the bulldog. I've included the sprites for these in the ROM but can't implement them. (Garfield's whiskers when throwing the pills are also implemented as background rather than sprites here.)

Music is also added for the video. I think the proto has Tetris music but it's disabled.

"The original music tracks are still present, and can be played by writing a track number to RAM address $6F5."


Also: I have released an ambitious Tiny Toon Adventures NES hack, but am still interested in improving it.

This changes the game's graphics to feature a different lead character, enemies, and cutscenes.

Proveaux has been helping me with some technical issues.


Can the Tiny Toon Adventures bosses be made more difficult, by requiring more hits to defeat? Thinking in particular of the too-easy pirate boss, and Dr. Gene Splicer.


For some reason, Not Elmyra's head sprites are misaligned when she changes direction suddenly on an incline, which messes up her face by apparently pasting it over itself.

I'd like to add an extra sprite or two to the right of Not Hamton the Pig, during his scenes.

I wanted to disable music for my Youtube videos, so it can be replaced. I may reenable music for the public release. Ideally we could actually replace the Tiny Toon Adventures theme music, but I know that's very difficult!

I recall I also wanted to slightly reposition some sprites when not Montana Max is defeated at the end of the game. (Sprites which change his color, and could be placed a little higher)

As a cheat in an emulator, you can write 10 to 4C to skip to the ending.

Minor things: The robot character who replaced Gogo Dodo has one sprite in the wrong position. And there's some errant chest hair on the ape/Wolverine boss.

Tiny Toon Adventures uses sprites for some elements of the intro and ending, and I was tempted to rework this to improve the colors in my hack but only did this in a couple places. The title screen uses sprite text, though.
4 Find out why everybody’s calling on Dr. Garfield.

(This may sting a little.)

Looking for an intense new challenge? Dr. Garfield is here and he’s got the cure!

Three kinds of ugly, nasty viruses are on the loose. But these germs are fun to catch. Garfield throws multi-colored vitamin capsules into the bottle. You can move, shift or spin the capsules as they fall. Arrange them to align with other capsules on top of the virus. If you can get 4 or more of the same color in a row, POOF! The viruses disappear! Destroy all the viruses in the bottle and you progress to the next round, where things get even more difficult. Play alone or enjoy simultaneous 2-player action, only from Nintendo on your Nintendo Entertainment System or Nintendo Game Boy.

A Week of Garfield Minus Garfield. 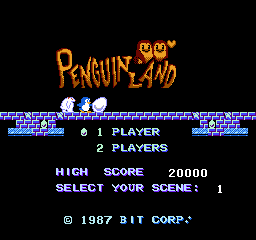 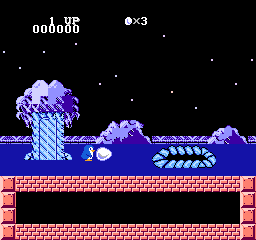 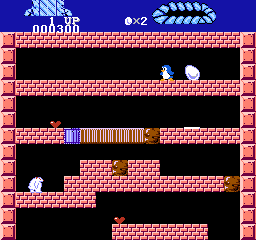 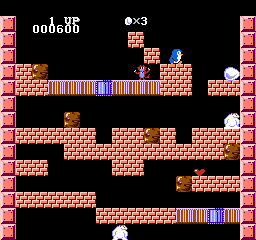 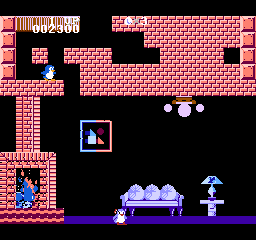 Sega’s classic Doki Doki Penguin Land is ported to the Nintendo Entertainment System. Well, sort of. This is based on the unlicensed clone Duck Maze, with new graphics.

In this puzzle platformer, Adelie the penguin (aka Overbite) must carry his egg to safety in 20 tough levels, avoiding hungry foxes and brutish gangow polar bears.

Heathcliff and the Garbage Ape (for Windows)

This is a Heathcliff reskin of Donkey Kong, or rather Mick Farrow's 2010 PC remake of the 1986 Ocean Software version of Donkey Kong for Commodore 64.

Every cat knows and loves the mysterious Garbage Ape- who arrives in the night to deliver trash to all good cats!

But now he’s gone ape and kidnapped the lovely Sonya!