« on: January 10, 2020, 09:11:21 pm »
SMB2 Demo here: https://mega.nz/folder/6CRU3ADY#xV3kUhMufDyreEL_OfErDA
This patch is for Super Mario All-Stars + Super Mario World (USA) unheadered rom. If you apply it to a regular SMAS rom the graphics will be messed up. Important to note: This Demo does not have any of the planned color pallet changes aside from the unripe turnip on the box art of SMB2, so keep that in mind. And heads up, the demo doesn't work on the SNES Mini's native emulator canoe. If you were intending on playing with a SNES Mini, you'll have to use retroarch. Hopefully the full game will work on Canoe.

Let me preface this by saying I'm extremely new to romhacking and my skillset is pretty limited. I started with just adding music, Some ExGFX, and a bunch of pre-made ASM patches to Super Mario World to make it feel more fresh. It was not that difficult for me since there were so many user friendly tools to help.  reading a lot of the technical stuff though goes right over my head. Hex editing, ASM, coding, it's all way too complex for me, so please keep that in mind when you make suggestions for this project. But onto business...

I started this by wanting to flip Mario and Luigi's overall and shirt colors in SMB2 since that's how Mario looked on the box and most of the art. It was my first time using a graphic editor ( YYCHR ) but after I finished, I realized I could do a lot more than just color swapping. So the project began!

As a kid, I adored the official artwork on the box, in the manuals, and sprinkled through out the Nintendo Power Magazines and Player's guides. I'd pour over them and try to redraw them, wishing they'd make a game in that looked more like the art. A lot of the Mario games in the past looked pretty off the mark from the promo materials. All-Stars in particular was a pretty big step ahead of Super Mario World in the graphics department imo, but they translated some of the sprites a little too faithfully from the NES versions, with weird stuff like bug eyed birdo, white haired Koopalings, and more. It seemed like a real missed opportunity to make the game look the way they were meant to look.  So that's exactly what I'm trying to do here.

Here's what's done ( note, any of these may be altered later on ): 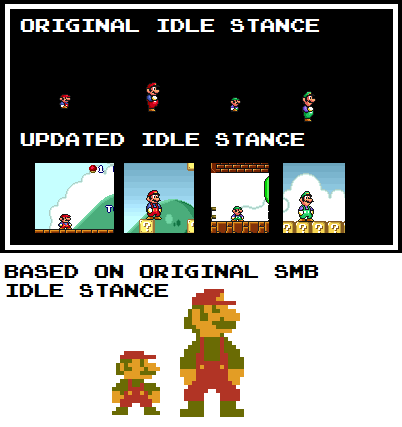 This has less to do with matching official art and more to do with how bothered I was that they copy pasted SMB3 Mario into SMB1 and just flipped his overall colors. The actual Mario sprite itself will change eventually so these are extremely outdated. 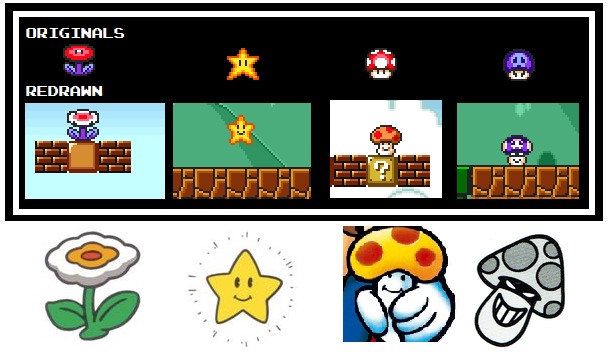 The original poison mushroom on the famicom looked the exact same as the super mushroom but just a smidgen darker. But I liked the new look for it in All-Stars too much so I kept the purple and the skull. I could not quite get a good looking toothy grin though. 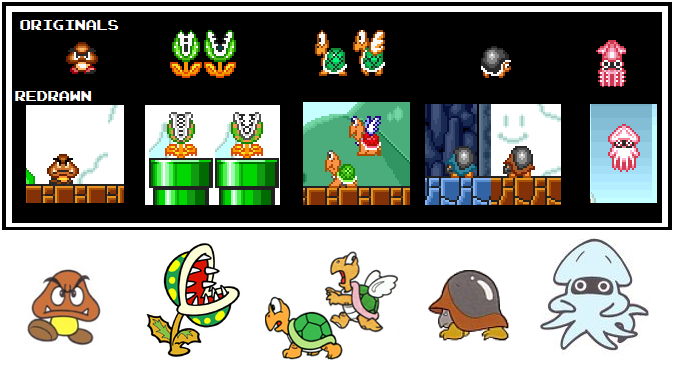 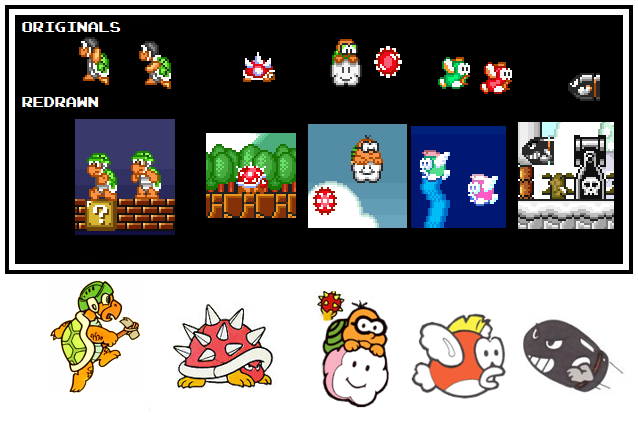 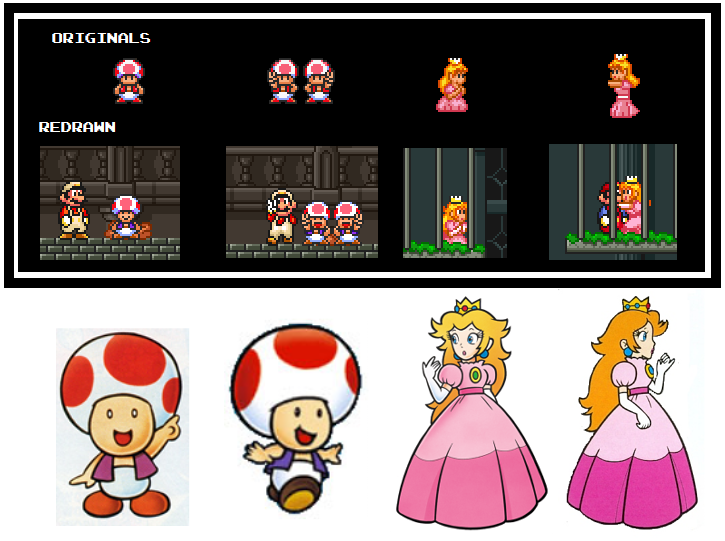 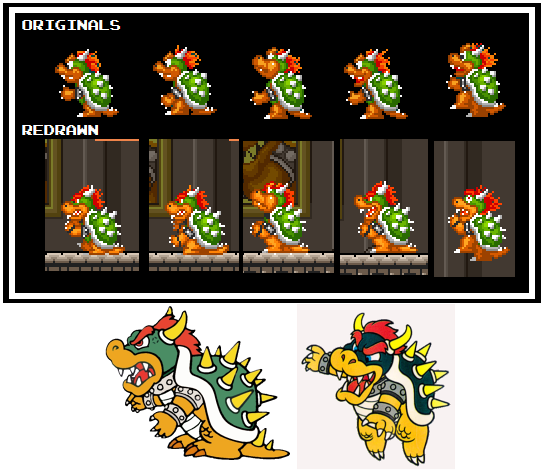 There's the big man himself, I wasn't sure I was going to do anything to him but I quite like the tweaks I've done. I did contemplate making him look like the "Blue Ox" Bowser from the japanese box art, but I decided against it. Would be nice if I had the ability to make all the "fake" Bowsers to blue while keeping the final Bowser true to his final design. 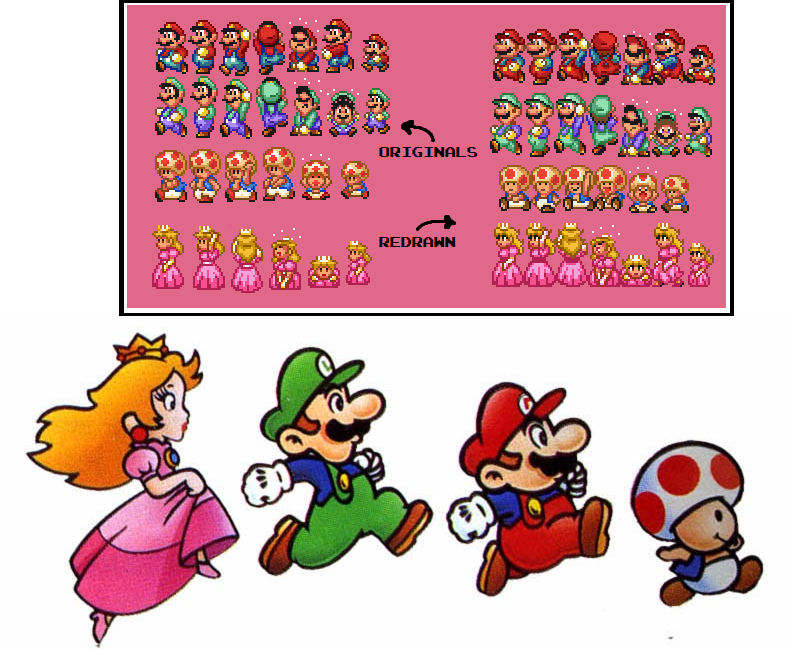 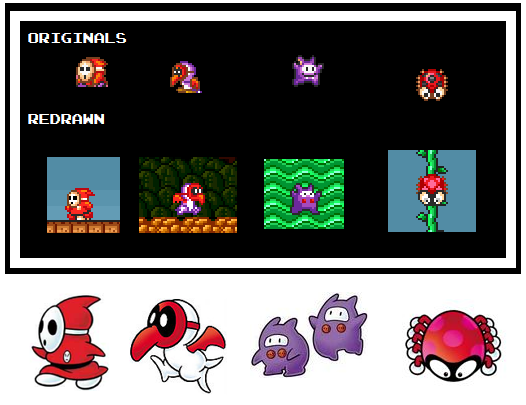 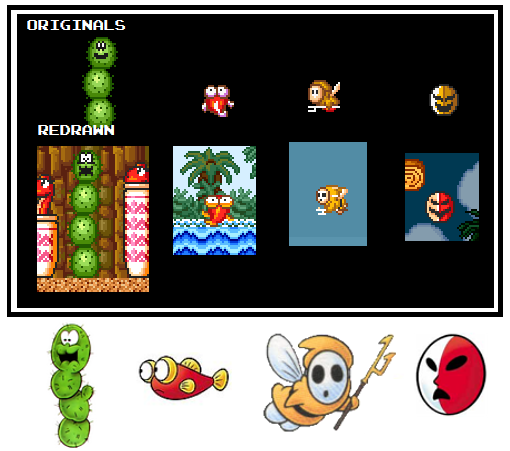 Phanto is an unusual case where the sprite doesn't match the official art not because of a lack of trying, but because they never updated the art from Doki Doki Panic. So instead of basing his art on that, it only took the color scheme. 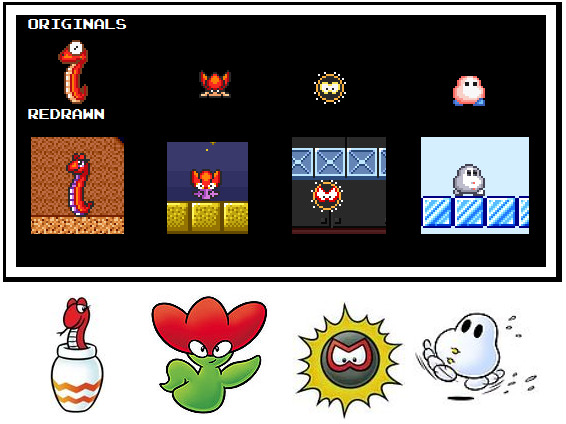 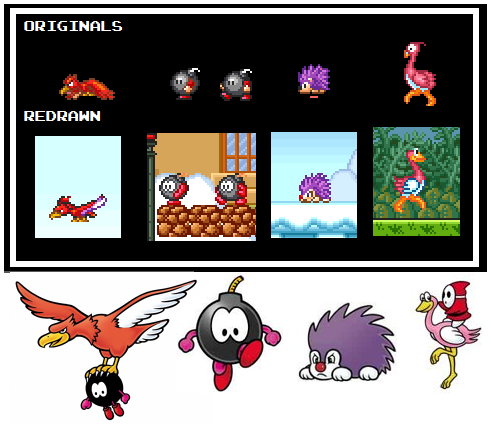 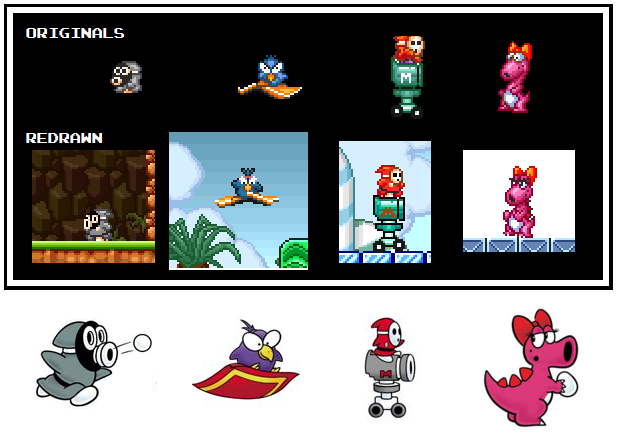 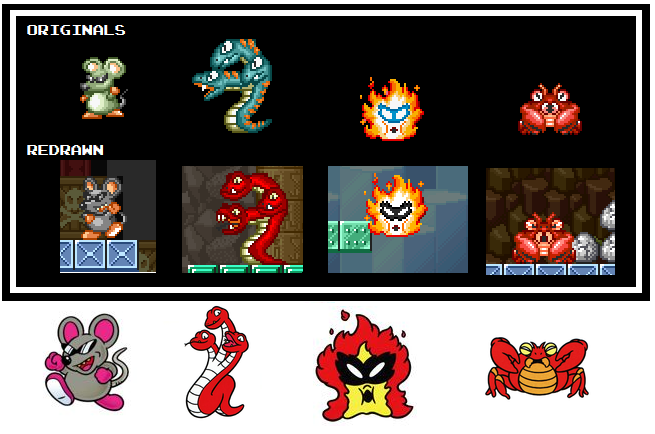 NOTE: Triclyde is still green in world 6. Thought it would be better than having two of the same color.
There's going to be some cases where characters will barely change, if they change at all. In the case of Fryguy and Clawgrip here, they kinda already match their artwork. All I did with Fryguy was darken his eye mask, narrow his eyes, and make his mouth more animated... Clawgrip... well, aside from squinting eyes, there was nothing to do. 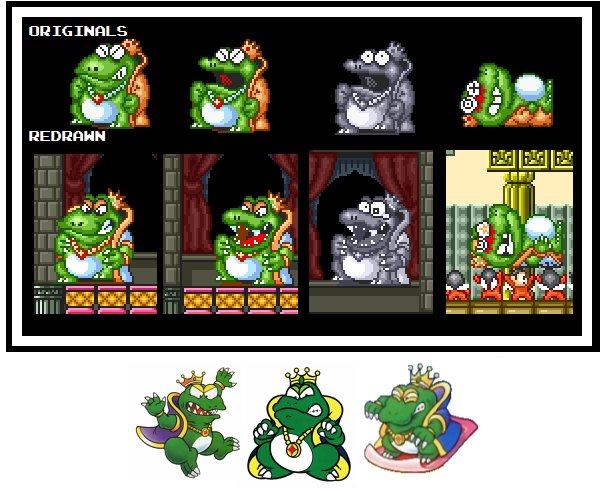 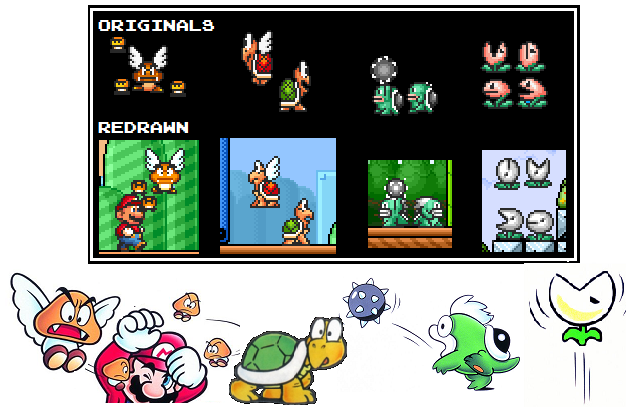 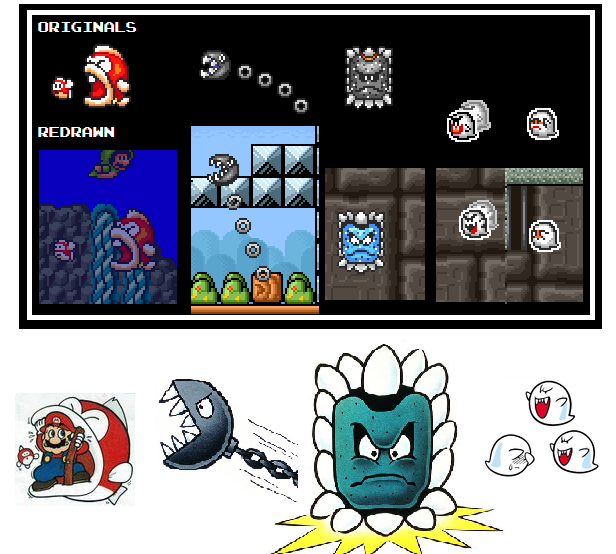 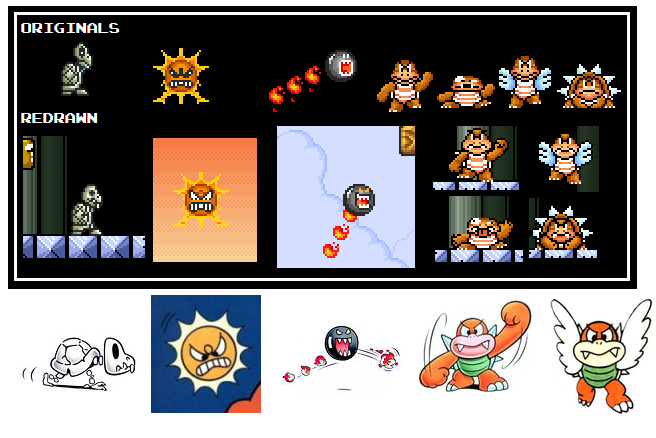 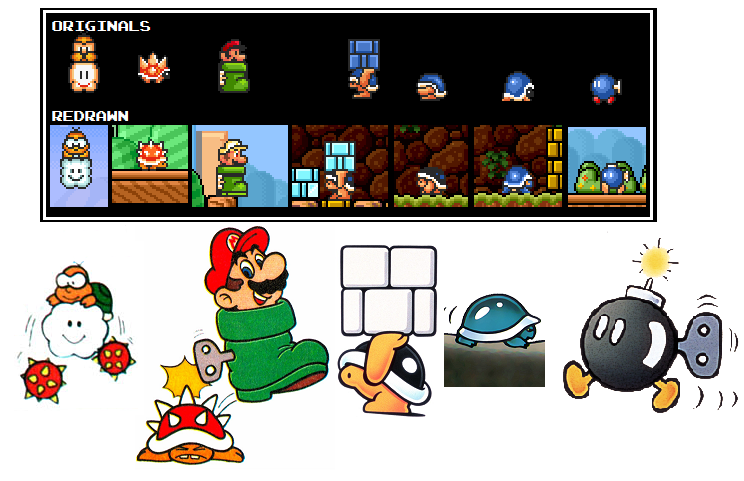 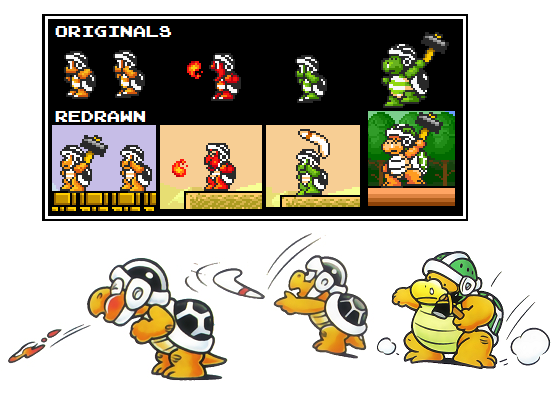 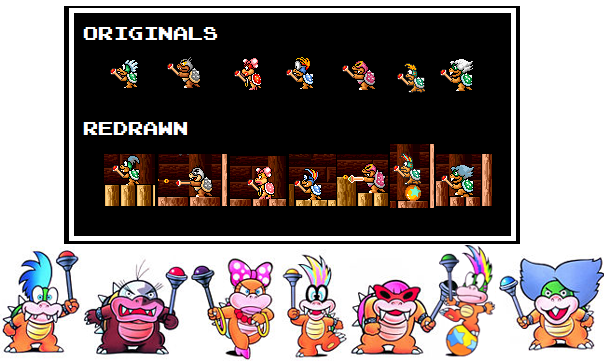 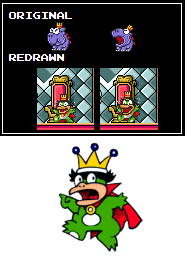 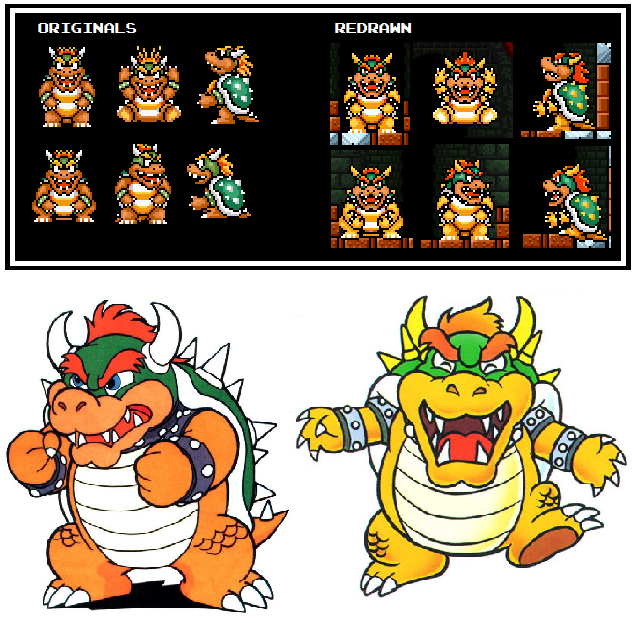 Since Mario and Luigi play a bit differently in these games, I've decided to give them slightly different poses from one another instead of just being exact copies.

I'm also setting out to restore things that were changed drastically or removed from the original versions of the game ( at least what I feel were changes for the worse ), for example, SMB1's ground tiles are bricks ( From MathUser2929's SMAS NES-ized hack ), and the rustling weed patches were changed back into fluffy bushes. SMB:TLL has updated versions of the unique tilesets from the original game, the Kings in SMB3 will be changed into what they originally were in the NES game instead of random enemies, Yoshi, and DK Junior. Liberties will be taken on things that didn't have artwork.  There may also be tweaks made that have nothing to do with the art but just make sense, such as the King of Grassland, who is dressed like a Sultan, swapping places with the King of Desert Land, who was dressed like a more traditional King.

I want to be clear though, I'm not trying to "modernize" any of these character designs, I want them to look like their official artwork from the time this game came out, so no lanky green haired Iggy, and the SMB2 Bob-ombs will have arms and huge bug-eyes, ect. This project was born from my love of pouring over the old instruction manuals and Nintendo power looking at the games artwork when I was a kid. Emulating the look of the bland New Super Mario Bros series style is the last thing I'd want.

What's left to do:


If you want to help in any way:
Leave me feed back. Make mockups or edit what i've done to show me how you'd do it differently, and give me some tips ( But be understanding if I don't take every suggestion I get). And encouragement wouldn't hurt either, it really keeps me going when people like what I'm doing.
If you'd like to help in other ways that are more involved, I'm not really knowledgable about hacking beyond spriting, so here's the stuff I'd like to do that is way beyond my skill level, although I don't consider any of it essential ( unless it's marked top priority ), would just be nice ):

If you want to edit the sprites directly, speak up and i'll drop the files into this Mega Link:
https://mega.nz/#F!Deox0QaJ!QzY1h8QMFx-B0x_nO3rADA!OXoTEIpJ

But please understand if I choose not to use what you come up with. So if you work on a large sheet, give me a preview early on. And most importantly, don't forget, this is not a project about modernizing the characters, I want them to look like the artwork from their respective games. I am willing to go as modern as Super Mario Advance in some cases where the original looks really, really bad ( like Nijis in SMB2 for example ) but I would prefer it if we stick to the SNES era.


Now, if you want to criticize, that's fine, but only do so if you can offer a suggestion on how to improve what you are criticizing.  Just telling me that something looks awful or would be better off programmed from scratch in it's own engine is not helpful.

Lastly, I'm going to repeat one more time, I am not a hacker I do pixel art. I don't understand anything about programming and ASM and hex editing. I'm only able to alter palettes thanks to a very helpful step by step walk-through in this thread.  So please keep that in mind when suggesting new additions to the project.
2

« on: December 19, 2019, 11:17:29 pm »
Let me preface this by saying I have zero romhacking experience and a lot of the more technical stuff is pretty dang confusing to me.  All I really wanted to do was create my ideal version of Super Mario World with better colors for the Mario and Luigi sprites, Luigi with unique sprites, a wall jump, and a much bigger sound track. Maybe a few other little changes here and there.

Well after several days, I got pretty close to getting exactly what I want but I never thought to test the Bowser fight. Why would I? I'm not changing anything about it.   Well as it turns out adding music to other levels does in fact effect the Bowser fight, the game hitches up every time the music changes... which is a lot during this fight.

I know you can't edit Boss rooms in Lunar Magic, so after some forum digging I tried a hex editor, thinking I thought I'd just change all of the songs associated with Bowser into the same song, thinking it would just keep playing, after a lot of confusion and headache I was disappointed to find that instead of continuously playing, instead the song just resets itself when it would normally switch.

I really don't want to give up on SMW with unique music on every level, could anyone help me figure out how to get rid of the hitching up problems in the Bowser fight, or how to set it to one continuous song as a work-around?

EDIT:My only clue is this thread: https://www.smwcentral.net/?p=viewthread&t=91534  but I really can't make heads or tails of most of it.  Am I meant to insert those numbers into a text document somewhere and run uber asm? I'm not really sure where anything is meant to go.

EDIT: Well, nevermind, I figured out how to do it. Pretty easily in fact.
There is going to be a bit of atmosphere lost in the Bowser Fight, and it still hitches up when you defeat Bowser, but at least that feels more natural, like how Super Metroid even hitches up when the self destruct countdown begins.
Pages: [1]