I have always been a little annoyed about what was going to be the Mega Drive/Genesis conversion of Turrican II: The Final Fight and what became of it, cheaply turned into a Universal Soldier movie tie-in because someone at Accolade thought the game would sell better that way.

Some time ago, puzzled by the fact that nobody has ever bothered to hack this game in order to turn it back into Turrican II, I decided to give it a try myself. I'm no hacking expert, but with some helpful tips by fellow member fusaru, I managed to hack the main sprite palette and restore all the Bren Mc Guire sprites from the Amiga version. It took me a while due to the great deal of animation frames it has, especially all the rotatory ones of the lightning whip attack. I also hacked/modified the HUD to make it more Turrican-esque, even thought I wasn't able to bring the Amiga original one in that case due to being completely different. Here you can see the result. 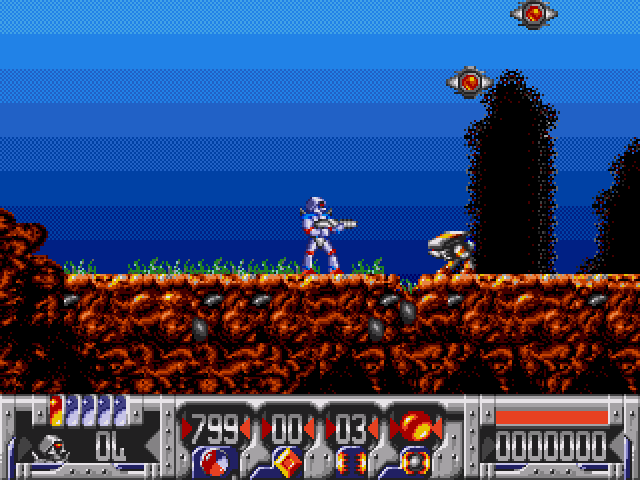 Yeah, looks like Turrican II: The Final Fight now. But unfortunately it's not complete. The game has a great deal of compressed graphics. In fact, pretty much everything is compressed except the Bren Mc Guire sprites and most scenery. It was thanks to this how I was also able to revert some of the cosmetic changes done in the Alien hive level. Most notably, the Alien heads in walls in platforms. 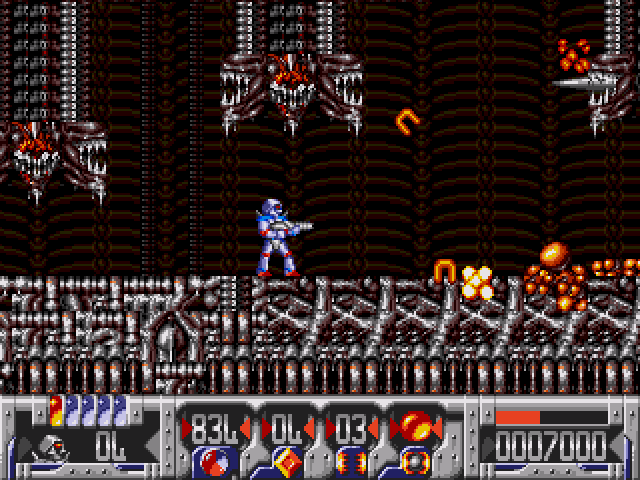 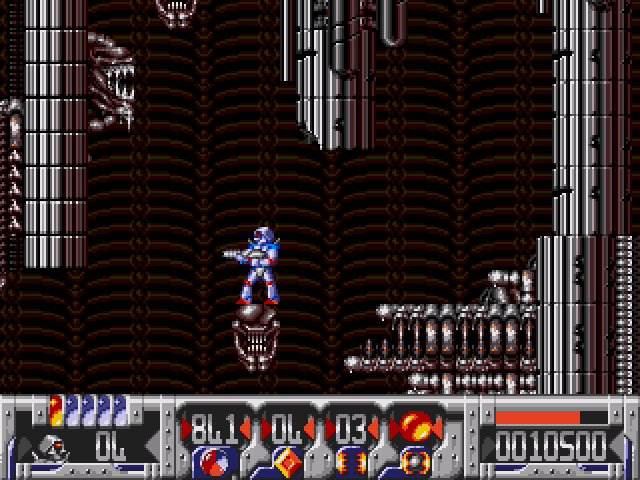 That, along with changing the ending text, was everything I could do before I hit a wall. It's a pity, because the amount of graphics that still need to be replaced are not so big compared to what was done already with the Bren Mc Guire sprite, as most enemies were left intact and the replaced enemies/bosses sprites don't have that much animation frames, but I don't know how to deal with their compression. It would also be necessary to replace the title screen and logo graphics, which also seem to be compressed, but some Asian hack managed to modify them in order to turn the game into some cheap Terminator 3 hack (boy, is this game doomed into Hollywood action movies nightmare), so it must be possible, but I can't figure how. I don't intend to restore the shoot 'em up stages which were turned into "new" levels on foot, as that would be too much work and my aim is leaving this graphically as much Turricanized as possible. Rearranging the level structure back to the original Turrican II one, since some levels are not in the right sequence (level 1 is level 2, level 2 is level 6, and so on), would also be great, but maybe that's too complicated to attempt as it would be needed to alter the game logic. Same with some rearranging musics which where changed, even though all the Turrican II soundtrack is present within the game.

So I have two choices, either I released this as it is, being some sort of "Turrican in freaking huge Dolph Lundgren's World", or someone please help me dealing with the graphics compression in order to properly finish this. I suppose I can keep restoring Turrican II graphics same as I already did with the Bren Mc Guire and scenery ones, once I know how to do it.
Pages: [1]