« on: January 04, 2021, 09:09:52 pm »
hello friends. I've been hacking / translating the sega megadrive game maten no soumetsu for the past few months. The game had a bit of a troubled history, getting delayed several times over multiple years, while the advertising ran full-steam with clever tag lines like "Arnath, who is the shadow standing behind you?!" I was unfamiliar with the game when I started working on it, but it's apparently infamous for being a terrible game, and it deserves its reputation 100%.

I've dabbled with a few translation projects in the past, but always reached my limit at inserting strings, sometimes doing some basic repointing, but my goal with maten no soumetsu was not to make any compromises. I'm not there yet, but I'm close enough that I wanted to share my progress, get feedback, and maybe get some playtesters. Aside from the title screen, everything in the game should be translated. My hacks are pretty amateurish, and my python script dynamically rewrites assembly code, so there could be bugs hiding anywhere. The first playthrough I did took over 10 hours and was quite frustrating, and I was cheating my pants off the whole time. I've tried translating certain lines a little more deliberately to direct the player what they need to be doing. I don't intend to release my patch "officially" until I put together a basic strategy guide, but if anyone is brave / masochistic enough to give this a spin, I'd appreciate it.

I'm grateful for any feedback on the game itself, my translation, the hacks, or my python inserter. Patches and all the files I used for generating the hack can be found on github: https://github.com/tashiww/maten_tools 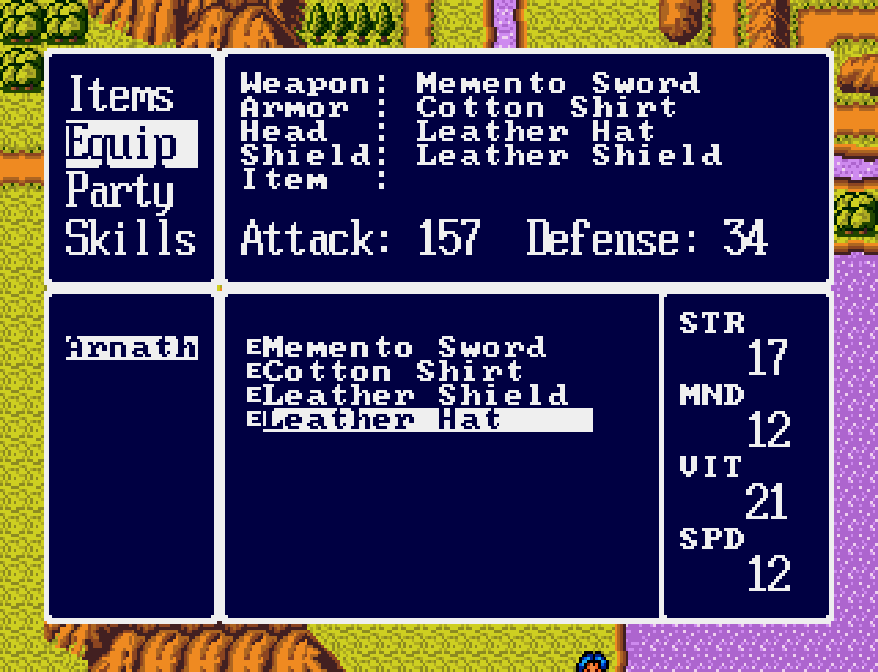 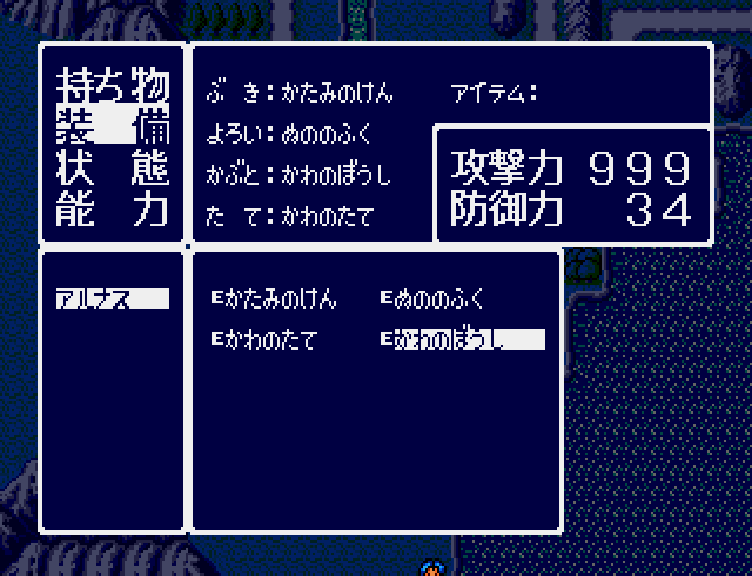 « on: June 28, 2012, 09:32:49 am »
Everyone probably knows Game Freak for making Pokemon, and since this community is sort of focused around obscure retro games, most of you probably also know that they made an RPG on the SNES called Bushi Seiryuuden - futari no yuusha. I haven't beaten it yet, but it's really fun and interesting. In particular, the combat system kept me engaged. There's a target number of turns for finishing each battle, and you get tasty candies if you can beat it, but it is very tricky to slip in under the limit. Although the combat has turns, it is very fluid, almost like an action RPG. If you want a better description, please read the HG101 article on bushi seiryuuden

As this thread title suggests, I dumped the script and made a table, but there are a ton of embedded pointers and/or control codes that I can't figure out. Since there is very little talk of this game from what the forum search tool could show me, I thought it would be worthwhile to at least post what I have for a couple reasons: maybe someone will help me figure out control codes, or maybe someone can use it to jump start a translation project of their own.

This is an incomplete shoddy patch. The dialogue is 98%ish translated, but some UI elements are not translated, some graphics are missing, some line breaks are misplaced and WILL CRASH THE GAME D: You have been warned.

I'm pretty bad at hacking, but I got a few breaks with this game. Marvelous only has 2 pointers. One is to the RAM location (SA-1 RAM I think...) where it writes a 24bit pointer table. The other pointer is to the start of the dialogue block. I expanded the ROM and repointed so the English script will fit.

I have 2929 strings translated and inserted out of 3075. As I get more lines translated, the going gets a little slower since I have been skipping lines that don't make sense without context. I will start my localization playthrough when I translate as much as possible without context (not to put too much pressure on myself, but probably this week). One unfortunate thing is that the dialogue is jumbled pretty badly. It almost seems like it alternates every other line between different islands... When I've done as much editing and proofreading / playtesting as I can stand, I would really appreciate playtesters. Marvelous is VERY sensitive with text formatting, and will freeze up and crash awfully if a string has 23+ characters, or if a line break is in the wrong place... and there are many branching possibilities, so with one playthrough I won't be able to test all strings.

As far as graphics, I did most of the menu things today but only with moderate success. The problem is that, as you see on the right side on "item" and "teamwork" is that some weird overlay persists, even though I replaced all the relevant graphics I could find... The other graphics problem is that I can't find a way to replace the titlescreen, or the short intro that plays before the title screen. Those are problems for way down the road, I reckon.

Now, I'll leave you with a fish:

« on: March 15, 2012, 12:41:35 am »
Howdy. I want to translate Marvelous ~ mou hitotsu no takarajima. I played the game a couple months ago, and boy was it fun! I took a crack at hacking it, then, too, and got as far as script dumping / inserting, but got busy with work, etc. Now without a pesky job to slow me down, I wanted to see if I couldn't get a little further.

Marvelous uses a 16x16 2bpp font. It includes ASCII characters so I can easily work on script insertion and mess with a font as a separate issue. The problem is that I can only fit 22 characters per line. Any more and the game crashes angrily. It would be amazing someone could help me somehow hack the font to be 8x16. I can insert my own font if the engine can be converted.

The other issue is that I'm afraid there isn't enough room for a full English script. The script area has around $2000 bytes of blank space after it, so for now I am just carving into that space, but that won't last long. Since there aren't any pointers (on startup, the script area is scanned and a pointer table is built in VRAM), I'm not sure if it would be possible to split text across banks...

Here's an SJIS encoded Marvelous text dump with Atlas commands and the corresponding table file. Typesetting is a slight challenge (formatting with the control codes, and keeping within the character limit). I'm attempting to script something to automate it. In the meantime, I can explain it if anyone cares.

The first game dialogue starts on line 3936 and sort of jumps around.

« on: March 13, 2012, 07:27:28 pm »
This is a mostly complete English translation of the SNES Casper originally released in Japan in 1997 based on the movie "Casper" released two years prior. The Casper game by Natsume released in America in 1996 has no connection to this game in any way.

In this game, the player controls Kat in an isometric world. Casper follows her around the haunted mansion helping her search for her father. Exploration and puzzle-solving abound. All the while, the evil Carrigan and her henchman, Dibs, have grown impatient and are hot on your trail. Can Kat and Casper overcome the odds and save Kat's daddy?!

I am abandoning this project because the intro contains compressed text and a few cutscenes use a sprite-based font which I cannot hack. As is, all in-game dialogue is translated and inserted, so I consider the game very playable, even if incomplete.

In the Casper file available on RHDN's abandoned project page you will find IPS and xdelta patches, the Japanese table, my English table, the Atlas script I inserted, and some other notes.

I am tinkering with the SNES game La Wares and heard that it perhaps shared an engine with another game. That game might be Burning Heroes or might be something else. Does anyone know?

« on: December 04, 2011, 10:09:14 am »
I'm trying to find the text pointers in the SNES game Marvelous - mou hitotsu no takarajima. The game has an SA-1 chip. The ROM size is 3MB, but the rom info in snes9x reports 32mbit. It is supposedly LoROM, but also uses HiROM addressing. The font tiles and script are uncompressed. I have a pretty complete table, and have dumped the script. Now, I want to find the pointers. I'm not sure if all this information is relevant, but better to have and not need, right?

Replacing every occurrence of A0A2 with random numbers did not affect the dialogue loading, so I figured the pointers are probably stored as offsets from a base pointer location.

I ran a trace of the first line of dialogue coming out, and I think I hit the nail on the head.
http://pastie.org/pastes/2964392/text

Ignoring the fact Marvelous is LoROM, hey pretty good? Looks like the pointer routine. EXCEPT I can't figure out what $407A94 is pointing to, or $97EB95, or $40DBE0 to be honest. Using BSNES's memory editor, I can see the pointer table starts at $40DBE0 and has a few hundred 24bit pointers. But what does $40DBE0 correspond to? ROM? Cartridge RAM? Using Lunar Address to calculate possible PC offsets for LoROM or HiROM of those locations doesn't yield anything sensible.

I know this is a poorly explained text wall, but I am banging my head on a wall. How can I find where the pointers are stored in the ROM?

To change the actual pointers, I still need to know what $40:EA80 maps to. Any ideas?
8

« on: November 21, 2011, 08:40:06 pm »
Hello. I am translating Lord Monarch for the Sega Genesis. I am new to this scene but have been following what resources I can find. At this point, I have dumped the script, inserted a tentative English font, and would like to start inserting text. But I hit a snag here. All the letters are 4 8x8 tiles, and I want to rework the font engine to draw them as 8x16 fonts instead. If RedComet sees this, I would love to know what assembler you used for your SMD hacks. I would also appreciate any suggestions on what someone without any assembly experience should do.
Pages: [1]