ListoMefisto - To you and Dark_Ryu, you're welcome! I really enjoyed the play through, great teamwork through out! Were you one of the players Listo?

Hello!
No, I wasn't one of the players although I'm training hard to be able to beat the game with them with a 1 credit clear game as well!

Dark_Ryu detected some minor bugs and he told me to ask you if they can be solved. These bugs are the following ones :

- There is a graphic bug while you are waiting to continue the game if the character who died was Haggar (screen 1).
- There is a permanent blockage if two characters use sword with knife between themselves (screen 2).
- Sometimes Rolento doesn't die even if he runs out of life (screen 3).
- Roxy girl character was blocked at the floor while Rolento didn't stop throwing grenades before time (screen 4).

The other bug was the one we already told you, the final digit from player 3 score that didn't increase when you died and continued the game.

Do you have in mind doing another FF 30th revision or another new hack project in the future?

By the way, Dark_Ryu told me that he would pay to see a Dungeons & Dragons Shadow over Mystara 6 Players Hack, LOL ;-D 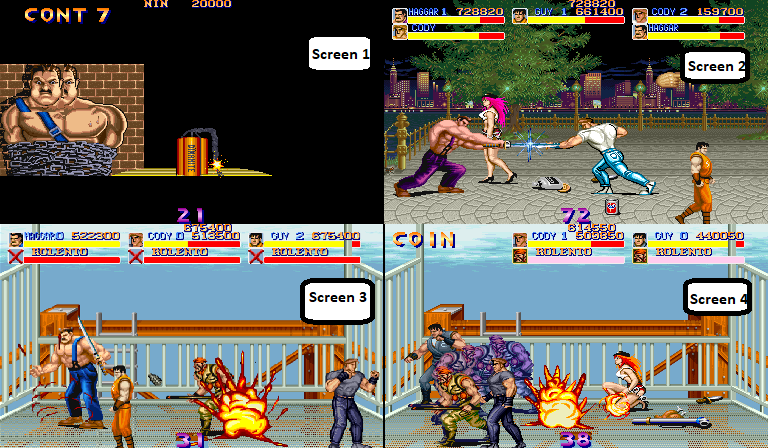 « on: December 22, 2019, 03:43:57 pm »
Hello,
Dark_Ryu and his friends would like to thank Grego and Rotwang for having created the Final Fight 30th Anniversary Edition Three Player CPS1 Mod! :-) We added the Hack to a Mame with Kaillera so it can be played Online and we would like to dedicate you this 3 players gameplay (1 credit clear) :

« on: December 03, 2019, 12:08:59 pm »
Grego,
the 3rd button is used so you can dodge Andores and some bosses like Edi. E policeman, Rolento and Abigail. That 3rd button was enabled on the PCB board but the original cabinet only had 2 buttons. If you take a look at this video :

You can see Haggar dodging Abigail when he grabs him.

« on: December 02, 2019, 11:43:15 am »
Another question. We noticed that the 3rd button is disabled, the one you could use to avoid the attacks from Andores (the attack they use when they grab you). Is it disabled on purpose? Thanks!

« on: December 02, 2019, 03:39:32 am »
One question. We noticed that the 3rd player increases points correctly but the last digit, the one that represents the number of credits used doesn't increase when you die and continue. Is it possible to increase the number of credits used? We would like to do a 1 credit clear game (3 players) and that digit is the proof that you didn't use more credits

We are enjoying a lot playing 3 players Final Fight! It rocks!!

Could it be possible to do a hack from Dungeons & Dragons: Shadow over Mystara so it could be played with 6 players simultaneously? : 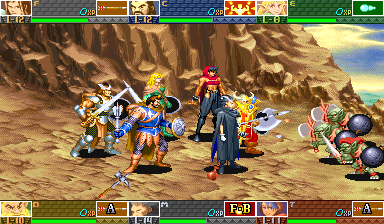