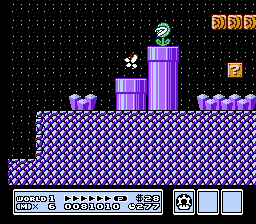 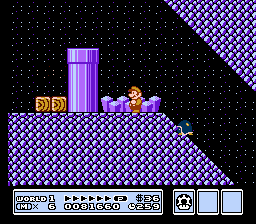 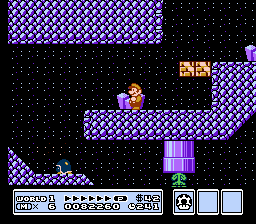 1-6
I just finished up this level not too long ago.  I decided to use OBS to record gameplay, rather than the built-in recorder in FCEUX.
2

« on: July 20, 2018, 03:51:00 pm »
I think I've pretty much settled on a good game to hack besides Super Mario World, and that's Super Mario Bros. 3.  The tools for it are fairly user-friendly, even though there are some things that I still don't get entirely, like setting up pointers for pipe/door warps in levels.  With a bit of help from friends on an SMB3 hacking Discord server, I'm sure I'll be able to pull off... 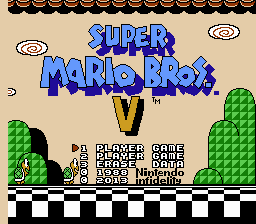 The title screen isn't too different yet.  I haven't really checked out the editing utility for it.  As you can see from the (c) 2013 Infidelity, though, it uses Infidelity's SRAM patch to enable battery saves, so kudos to him/her for that. 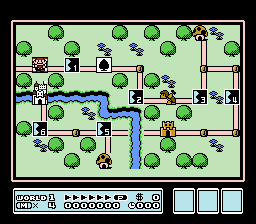 The World 1 Map has also been changed. 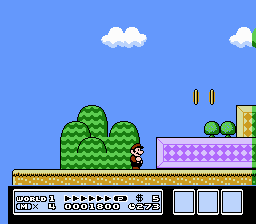 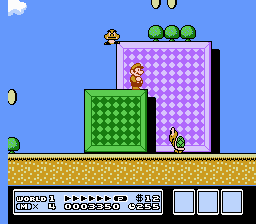 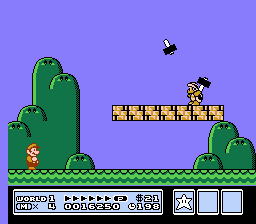 Hammer Bros. Battle
Besides graphics, this hasn't been edited yet.  I mostly took this screen to show off the new brick block graphics I drew last night/early this morning.  Yeah, I'm a night owl, and, despite my Mormonism/Christianity, I don't think it'll send me to hell. 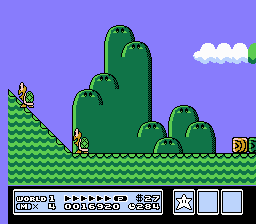 1-2
It's harder to get good in-game screens in this game than it is in SMW.  In SMW, you can just pause the game to take a screen.  Here, pausing renders in-game sprites invisible. 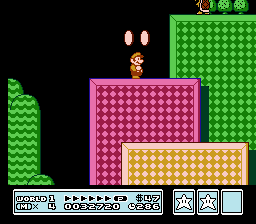 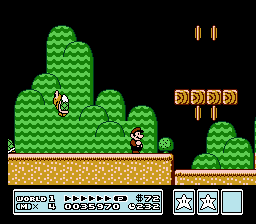 1-3
This level almost stopped me dead in my tracks when it came to hacking SMB3 because, in its initial form, it crashed the game.  With help from the above-mentioned SMB3 Discord, I learned that you MUST place the variable-height colored block ledges on the ground.  I could've used the floating ledges, but I felt those wouldn't have really fit the aesthetic I was going for with this level. 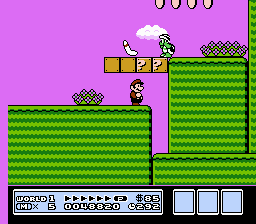 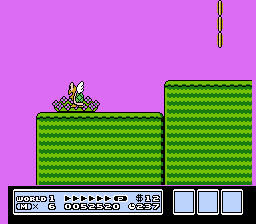 1-4
I probably could've timed that second screenshot better.  I had to take a hit to get it and just so happened to catch a frame where Mario was invisible due to Mercy Invincibility. 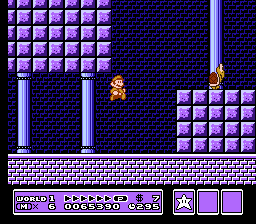 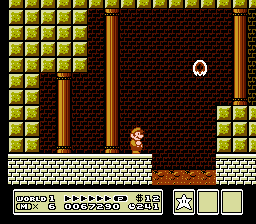 1-Fortress
This level also gave me trouble due to not understanding pointers.  Edward Rey helped out immensely by setting the pointers correctly so that I could get that second room working.
3

ROM Hacking Discussion / Re: A good game to hack after years of SMW?

« on: June 29, 2018, 01:21:21 am »
I've had some decent success just messing around with SMB3 Workshop, enough to say that the one level I made might turn into at least a "level collection" mini-hack.  I posted a video of it on the video thread, but it couldn't hurt to re-post it here.

Here it is.  I even did some graphical edits, something I frequently do in SMW.
4

ROM Hacking Discussion / Re: A good game to hack after years of SMW?

ROM Hacking Discussion / A good game to hack after years of SMW?

« on: June 27, 2018, 05:35:48 am »
I've been hacking Super Mario World on and off since 2006.  I'm currently more than halfway through my current project in terms of completed Worlds, and while I have no intention of canceling it, I feel that it may be time that I try hacking other games, either once the SMW hack is finished, or when I'm in need of a side-project.

The main appeal of SMW hacking is that it's extremely easy, and this extends beyond the incredibly user-friendly Lunar Magic, which allows you to edit levels, palettes, graphics, and the Overworld map.  Tools used to do things such as add custom music and ASM-based assets are also very easy to use.

Beyond Super Mario World, I've dabbled a bit in hacking the Genesis Sonic games, specifically Sonic 2, and have managed to complete a hack, even if it can be a bit mediocre.  I've found SonLVL, the latest editor for these games, to be about as close to Lunar Magic in terms of user-friendliness as one can currently get for the Sonic games.  Music hacking was also fairly simple, and I created most of the music in my Sonic 2 hack.  Beyond that, though, there's a bit of a learning curve to other things, most likely because the Sonic scene has adopted split disassemblies as opposed to editing ROMs directly.

Prior to posting this, I tried SMB Utility for a bit, and while it seems pretty straightforward to use, SMB1 doesn't seem as flexible in terms of what can be done to a level.  I have yet to discover how to add or remove objects or if that's even possible.

Here are some games I've thought of:
SMB3: I've kinda been interested in hacking this since playing Super Mario Bros. 3Mix.

Kirby's Adventure: I love this game, and KALE looks pretty user-friendly and Lunar Magic-like based on the one screenshot I saw.

Super Mario Land: I took a look at LandForger, and it looks pretty simple.  Haven't actually tried it yet though.

Super Mario Land 2: This is another favorite game of mine.  If I were to do this one, would MarCas or another editor be better for me?

TLDR: Which game should I try next?
7 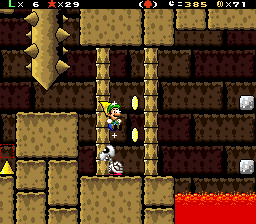 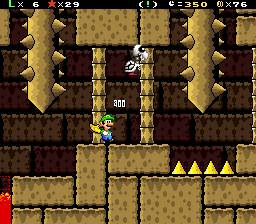 This fortress is all about Layer 2 threatening to crush you in some way.  In the first room, there are a lot of skewers. 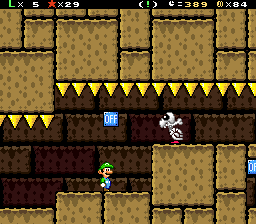 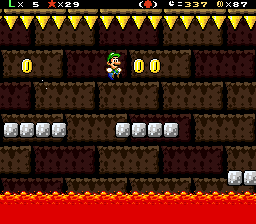 In the final room, you have to platform your way across this lava pit while the platforms are rising toward the spiked ceiling.  Gotta go fast, even if you're not Sonic. 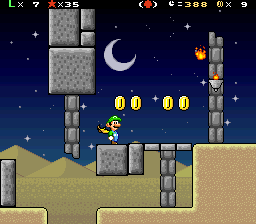 Everything you THINK should stay still moves here. 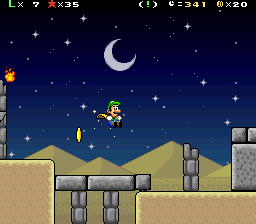 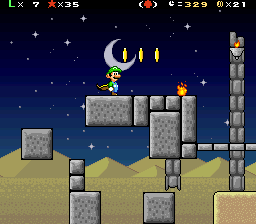 32x32 blocks can knock you into the abyss if you let them. 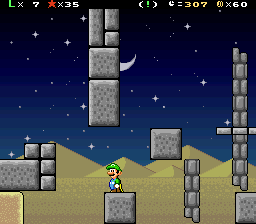 This is probably the trickiest set of 3 moving blocks.  It's very easy to fall to your death if you stay on a block too long and don't time your jumps right.
June 20, 2018, 07:44:45 pm - (Auto Merged - Double Posts are not allowed before 7 days.)The rules say nothing against double-posting, so I'll just assume that, like on other ROM hacking forums, it's okay to do so on my own my threads when I have progress to show off.  Anyway, here's Sesame Sand 3 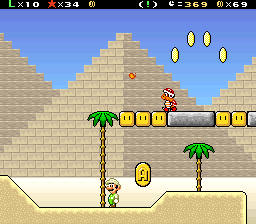 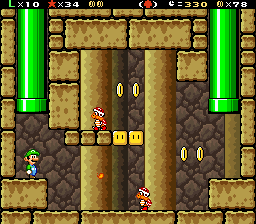 This is a "Kill Room."  Kill the Fire Bros. in here for a prize! 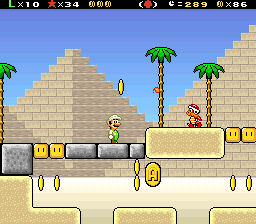 If you manage to stay big, despite all the fireballs being shot and spat at you, you'll be rewarded with the fourth A-Coin.
8

« on: June 13, 2018, 08:02:00 pm »
Super Luigi Land is a traditional, chocolate-leaning choco-nilla ROM hack of Super Mario World that I began working on late last summer.  It may be my longest SMW hack to date, with 94 of the 96 available level slots slated to be used.  These levels will be spread across the standard 8 themed Worlds.  Currently, I'm working on World 5.  Here is the World list:

The completion percentages only apply to levels.  The Overworld for this hack is complete.

« on: September 18, 2015, 02:13:49 pm »
Arachnid Antics
This is the latest level in my current Super Mario World hack in progress, Super Mario Land 3: Tatanga's Return.  I have been considering changing the first part of the title to New Super Mario Land though.
11

« on: September 15, 2015, 01:01:01 pm »
This discussion reminds me of an episode of Game Theory where MatPat mentions one of Nintendo's past attacks on YouTube videos of their games.  For those not interested in clicking the link, MatPat theorizes that one reason Nintendo is losing the 8th Gen Console War is that Nintendo keeps taking down videos showing their games.  Yeah, they will advertise their games on TV, but not everyone watches TV or the channels where these ads are likely to run.  There's one game I own for which I've never seen an ad on TV: Kirby Squeak Squad.  I learned about this game from the internet, and became more interested when I saw it in action through YouTube Let's Plays.  Tempting as it was to download a ROM of the game, I decided to wait until I could get it legitimately.
Pages: [1]