Before the EDF, there was the TDF: PSX mecha action game Remote Control Dandy translated

An English translation of the PlayStation mecha action game Remote Control Dandy, the first by Earth Defense Force developer Sandlot (in all but name), has been released!

In 1999, twelve-year-old Mamoru Oza, heir to the largest fortune in the world, received two gifts from his father. The first: A simple handheld remote controller…which operated the fifty-meter-tall combat robot “Vordan”. The second: Ownership of the newly-established Torino Defense Force Co., Ltd, a company formed to combat the “Enigmabots” – mysterious giant robots rampaging through the world’s major cities. Remote in hand, Mamoru now finds himself the sole hope of survival for the people of Torino City.

Can a boy, his robot, and a single remote solve the riddle of the Enigmabots and save the world…without going bankrupt first?

Remote Control Dandy is a 1999 mecha action game by Human Entertainment for the Sony PlayStation. In a major departure from most mecha games, it hearkens back to giant robot shows of the ’50s and ’60s such as Tetsujin 28-gou, in which the robots, rather than containing a human pilot, are controlled from afar via remote. The game adopts this as its core mechanic: not only does the player have to contend with remotely navigating their robot in the manner of an RC car, but also personally run after it to keep it in sight, all while not getting stepped on by enemy robots.

Though the game was nominally developed and published by Human Entertainment (known for the Clock Tower and Fire Pro Wrestling series), Human went bankrupt a few months after its release, with almost all of the game’s key staff members subsequently founding the game studio Sandlot and going on to develop the successful Earth Defense Force series. Thus, Remote Control Dandy is essentially the first Sandlot game; it bears all the hallmarks of their unique brand of outsize destruction, and it’s received the occasional nod or oblique reference in their later games. Particularly, the 2002 game Robot Alchemic Drive is essentially a spiritual sequel to this one – and Sandlot would even go on to make an actual Tetsujin 28-gou game!

This patch fully translates the game into English. Aside from the text, subtitles have been added to scenes which were originally voice-only, and all in-level textures such as billboards are also translated (the ones that were legible, anyway). Video of the translation in action can be viewed here.

The patch was the work of TheMajinZenki (translation), Supper (hacking), cccmar (editing and testing), and Xanathis (testing). Due to having worked on a large number of projects together, and in an attempt to resolve a frequent source of confusion, this team has decided to adopt the name “LIPEMCO! Translations” for their collaborative projects. They hope the partnership will continue to be a fruitful one.

Those interested in this game may also want to check out the fan translation of Sandlot’s Nintendo DS title Chou Soujuu Mecha MG, released last year by Phantom, Supper, and cccmar; the games share many conceptual similarities. 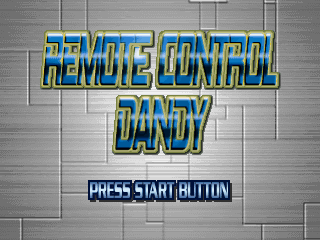 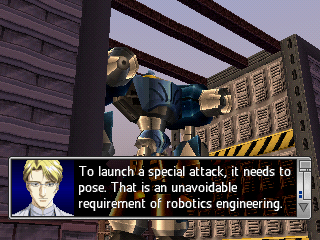