In a world where giant robots known as Marionation Gear, or “Puppets”, are artisanally handcrafted in workshops, a certain boy serves as an apprentice at the Galouye Workshop, dreaming of becoming a “Puppeteer” (mecha pilot) and opening his own workshop with fellow apprentice Kay. But their peaceful daily life is shattered when the autonomous Puppets known as the Automen begin going on berserk rampages around the world. Together with new apprentice Anne-Marie, the hero and Kay are pulled into a conflict that could change the course of Puppet history…

Chou Soujuu Mecha MG is a 2006 mecha action game developed by Sandlot, the studio behind the Earth Defense Force series, and published by Nintendo. It combines the developer’s aptitude for larger-than-life spectacle with one of the most innovative and fun uses of the touch screen in the DS library: in addition to standard movement with the D-Pad, each of the game’s 100+ playable mecha has its own unique “cockpit” controlled with the touch screen. Players can pull levers to swing their robot’s arms and hurl buildings at the enemy, flip a switch to transform into a car, punch in launch codes to fire missiles, and countless other imaginative setups. With well over 100 missions, ranging from battle to racing to destroying burger joints, every mecha has a use.

Footage of the translation in action can be viewed here.

In addition to the patch, the game’s translator has scanslated several chapters of its tie-in manga adaptation, which can be viewed on the patch’s release website here.

This patch was the work of Supper (hacking), Phantom (translation and additional art), and cccmar (testing and editing). The authors hope you’ll enjoy this revival of one of the DS’s best-kept secrets. 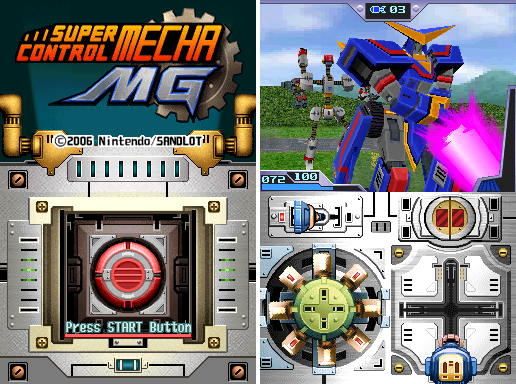