A new RPG for you and me to play - in English!

After a couple of years in the planning and production stages, a full English patch of SFC Record of Lodoss War is ready for RPG-lovers and fans of the Lodoss saga to enjoy!

Dynamic Designs chose this project with the simple objective of producing a complete translation. LNF Translations released a partial patch some years ago, one that converted most of the game’s dialogue to English but left much of the menu work and certain other features undone. Using the story in the LNF’s work as a guideline, Eien ni Hen translated the remaining Japanese, and we went to work. Unfortunately, some time after releasing the original LNF v0.90 English patch, project coordinator Lina` chan was tragically killed in an automobile accident, and the remaining members of LNF Translations never completed their patch.

Selection of this project came about as the result of a random conversation between Recca, Wildbill, and Red Soul - while that trio was working on Burning Heroes. As Wildbill recalls, Recca casually mentioned how nice it would be to have a complete translation of this game, Red Soul agreed, and Wildbill asked Bongo` how feasible it would be to just insert some English menus.

No one knew how to contact the remaining members of LNF translations, but Bongo` quickly deduced that the most efficient way to “finish” this game would be to design a dedicated insertion system with full assembly support and re-load a complete English translation from scratch. Using the critical dialogue translation work of LNF’s original patch as a take-off point, in 2013, the D-D team re-wrote the story and inserted it into this patch that we built from the ground up. Red Soul assumed lead coordination duties, and as always, the remainder of the D-D team contributed in their various areas of expertise.

However, without the original work of LNF Translations, completing this project would have required considerably more time. Accordingly, the spirit of LNF’s work is still woven into the fabric and tone of this saga. And a special thanks goes out to Eien ni Hen who fleshed out the numerous miscellaneous files’ translations that were missing in the LNF release.

We hope everyone involved in the original project realizes that our patch is as much LNF’s as D-Ds. We have paid proper homage to those players and their work in our translated and redesigned ending credits for this game. If anyone discovers that we left out (a) key player(s) who deserve(s) to be listed in the ending credits, report this information so we can modify our file and release an updated patch.

Here in D-D, Draken and Taskforce were instrumental in giving the script an important layer of QA, making sure it did not stray from ROLW ’s style and form. Due to their efforts, Red Soul reports that “many of his brain neurons were spared” from becoming frayed during this process! In the final stages of production, Wildbill, with his well known wit, lighthearted style, and penchant for easily digestible, savory writings, applied when appropriate his own lively twist to both characters and the general populace of Lodoss Island. Beta went rather smoothly thanks to the efforts of 4ph of Silva Saga-2 (French) fame and Wagner, a forum denizen who possesses an energetic disposition.

Final touches were applied by FlashPV (our friend who built the English title page for Burning Heroes and sent us redesigned English title pages for ROLW) and the ever-meticulous Bongo`. Using the combined graphics design work of Red Soul and FlashPV, Bongo` painstakingly reworked color palettes and layers intricacies until he could insert fully translated title pages into D-D’s patch for this game.

So what are you waiting for? Go to our Download page and grab a copy of our 100% translation of ROLW and start enjoying this excellent RPG from Japan - in English! 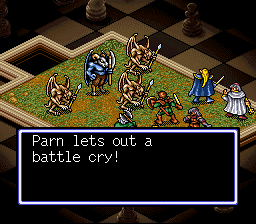 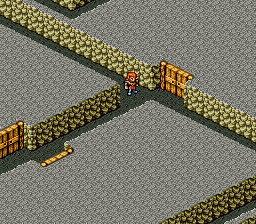