This holiday season aishsha and Pennywise, with help from Eien ni Hen and friend, present to you a complete translation of the NES RPG Sansara Naga. The game is a Hindu-themed DQ clone, but it is also a dragon-raising sim and a semi-complex one at that for a game of its time. The game ditches mindless grinding and a traditional experience stat in favor of something else that involves feeding your dragon certain types of enemies to raise certain stats. On top of that, your actions influence your dragon’s behavior. For example, if all you do is run from battles, your dragon will become a coward. The game world may be somewhat small, but it is also kind of an open world type thing where you can pretty much explore everywhere right off the bat. That’s pretty much Sansara Naga in a nutshell, but do give it a play and see if you think it’s as good as we think it is.

We’ve also recorded a sort of Let’s Play that covers the beginning of the game, so if you’re stuck or curious about the game, please refer to these videos.

We also have a scanned and translated manual that we would like someone to photoshop in the English translation. We would rather do that than release the text file. The manual will pretty much answer most questions gamers have about this game and there are sure to be questions.

Lastly, we have included a few stocking stuffer translations to go along with this release. The game of note is Peke and Poko’s Daruman Busters. The game is paid advertising for Japanese bakery company Fujiya, but it was developed by Birthday, a dev we have a history with translating games for. 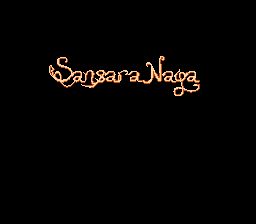